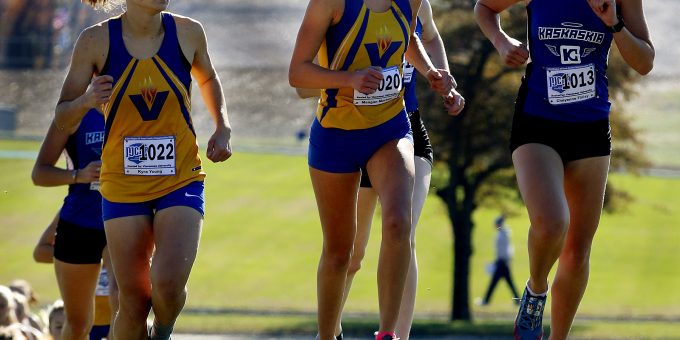 (VINCENNES) – The Vincennes University Men’s and Women’s Cross Country teams hosted the NJCAA Regional 24 Championships Saturday afternoon at South Knox High School and did not disappoint, capturing both Division I Individual Championships, while finishing in second place as a team.

The women’s team was once again led by the duo of Meagan Moreno and Kyra Young, who took home the first and second place finishes, with Young finishing nearly a minute ahead of the third place finishers.

Vincennes continued to have a strong showing from their women’s team, with Kaylee Lange and Jacy Collins placing in the top 15.

Kaitlyn Koenig rounded out the Blazer top five, finishing in 17th, giving VU the points to slide in to second place as a team, just one point ahead of Kaskaskia.

“I thought we fought hard and we competed hard,” VU Cross Country coach Chris Gafner said. “Our women’s team is improving, we’re getting better. We’re closing that gap that Heartland has had, which shows us we’re making strides towards where we need to be for Nationals.”

“Meagan ran sensational, Kyra Young ran really well, she’s been running strong all year and Kaylee Lange ran really well for us today as well,” Gafner added. “Lange has been banged up all year but she finished three minutes faster than her last race, so hopefully we can keep that rolling into Nationals.”

The men’s team was led by former South Knox runner and Vincennes native Trenton Faulkner, who had a great showing finishing in fifth.

Faulkner was followed quickly behind by Nick Vogt, who came into the race battling an injury, before stumbling on the course caused him to fall a couple of spot, finishing 11th.

The VU top five was rounded out by Walter Tanui, Gavyn Mundt and Joshua Hodge who finished 16th, 17th and 18th respectively.

Just like in the women’s race, the battle for points was tightly contested as VU held on to second place, edging out Kaskaskia again by just a single point and finishing four points ahead of fourth-place finisher Danville Area.

“Our men’s team is pretty banged up,” Coach Gafner said. “I thought Trenton ran an excellent race, he’s been improving every meet. Nick unfortunately has had a knee problem and he aggravated it at one point in the race and same thing with Walter Tanui, he’s had a calf muscle that’s been bothering him.”

“We’ve got to try and get those guys as healthy as we can in the next two weeks and keep the other guys improving,” Gafner said. “But I’m proud of how they competed, that was the main goal coming out today. We can’t control the injuries, but we can control our effort and the way we compete with everybody else.”

Trenton Faulkner finished fifth overall in the men’s race, but his run was good enough to earn him the Regional Championship for NJCAA Division I runners.

“I think we’re gaining traction on the women’s side, so I think we have a chance to go in and improve on where we’re ranked,” coach Gafner said about his No. 9 ranked women’s team.

“I think on the men’s side, a lot of it is going to depend on how healthy we can get. I’m a little worried about injuries at this point in the year, but there is not much we can do other than let them heal and hope to be ready to perform when we get there,” Gafner said about the No. 17 ranked VU men’s Cross Country team.