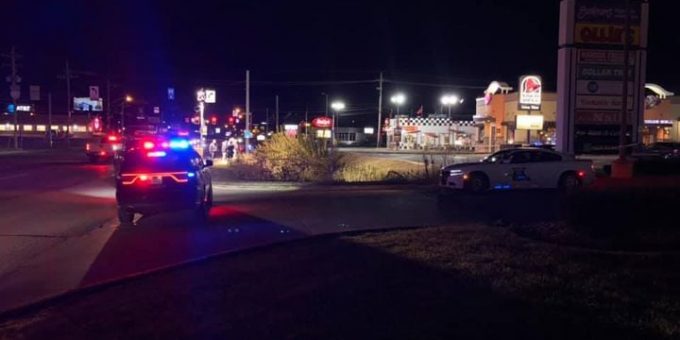 (SEYMOUR) – Detectives from the Indiana State Police-Versailles Post began investigating an officer-involved shooting that occurred along US 50 (Tipton Street) near Burkhart Boulevard in Seymour at Walmart.

According to Indiana State Police investigators, the incident happened at approximately 8:30 p.m. Officers with the Seymour Police Department were called to the Walmart Supercenter located at 1600 East Tipton Street to investigate a theft from the store.

Upon arriving in the area, the officers located a white male matching the suspect’s description along Tipton Street who was allegedly in possession of stolen merchandise.

The man fled from the officers on foot northbound across Tipton Street.

Police say the man entered a ditch in front of Taco Bell. He was armed with a handgun.

Two Seymour Police officers fired their weapons, striking the male. He was provided medical attention at the scene before being transported to Schneck Medical Center in Seymour. He died from his injuries.

At this time, investigators are working to identify the man who was shot.

An autopsy is scheduled for Tuesday, November 3rd. His identity, as well as the identity of the officers involved, will be forthcoming.

No officers were injured in the incident.

The Seymour Police Department requested that detectives from the Indiana State Police-Versailles Post conduct the investigation into the incident which is standard procedure.

At the conclusion of the investigation, the case will be presented to the Jackson County Prosecutor’s Office for review.