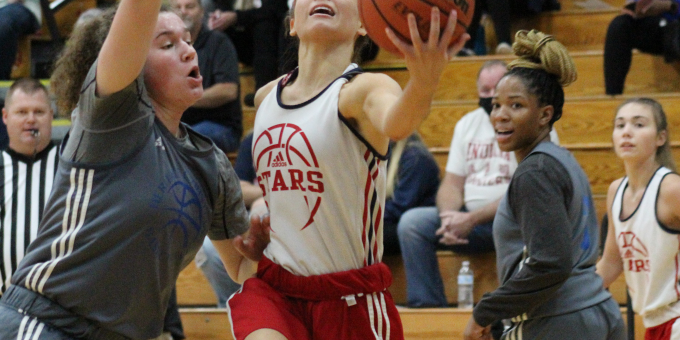 BEDFORD – On All Hallows’ Eve, Bedford North Lawrence continued to show just how scary-good it could be. Oh sure, a few dead legs were exposed among the living, but the treats were far sweeter than the tricks during the final preseason exhibition.

The Stars, facing outside competition for the first time since last year’s Class 4A semistate, displayed more flashes of brilliance during their IHSAA sanctioned scrimmage with Heritage Christian on Saturday afternoon.

The opening quarter, a 26-14 blitz of beauty, was particularly spectacular as BNL finished with a 68-52 ‘victory’ over the Eagles during the four quarters of varsity action. The Stars struggled to maintain that pace, and most teams would this early in the process. But those 12 minutes (played with a running clock) could be a forerunner of the run-amok style and offensive explosiveness this season.

“That’s how I envision this team playing, as we get in better condition and get more experience,” BNL coach Jeff Allen said. “That’s what we can do.”

The final half of that first quarter was BNL’s best. After point guard Ari Wiggins, a Michigan recruit and one of the best floor generals in the state, sparked the Eagles to a 10-7 lead, the Stars erupted with a 14-2 burst.

Chloe McKnight started it with a pair of 3-pointers and freshmen phenom Chloe Spreen slashed with a cut to the post for a layup. Spreen followed with back-to-back interior buckets, and Haley Deckard converted a McKnight pass for a layup.

McKnight closed the period with another bomb and a breakaway off an Irye Gomez steal. Scintillating stuff.

The other three quarters were more competitive, typical and the expected from the proud Heritage Christian program. BNL claimed an 11-10 edge in the second, but the Eagles bounced back for a 13-10 ‘win’ in the third. BNL returned to form with a 21-15 advantage in the final frame.

For the Eagles, making their public debut under new coach Cassie Wiseman as she takes over for veteran legend Rick Risinger, Wiggins was as good as advertised. The left-handed sparkplug finished with 20 points, and was the catalyst for the bulk of the rest. Tyranny Brown added 14 points.

“We’ve got Ari Wiggins and she creates so much,” Wiseman said. “It was good to play another team. We’ve been going against each other against July.”

McKnight hit 5 treys on her way to 17 points, Spreen totaled 12, and Gomez added 10. The Stars, who drilled 16 from long range in the intrasquad scrimmage on Tuesday, popped 9 more against the Eagles.

“I’m really big on defense, and at times I saw flashes of good man-to-man defense,” Wiseman said. “Other times we have to get moving. They’re so good at running girls off screens, their offensive sets are awesome, the way they move and cut. We have to communicate more.”

BNL’s report card is usually going to start with defense and rebounding. Turnovers (and there were a few) and shooting will be key, but Allen will always keep a close watch on the other end with his smaller-than-normal team.

“Heritage Christian is a high-level team and Ari Wiggins is probably the best point guard in the state,” he said. “So for the most part I liked our defense.

“I thought we played hard. We did a really good job of trying to execute. For the most part, we rebounded well. There were a few possessions where we got caught standing. We’re not that big, we have to make space and move people out.

“We pushed the pace and got tired a few times, but we haven’t played since February. It just felt good to be out competing. It’s just different playing against your teammates and playing an opponent. All of a sudden you have an athlete out there.”

The Stars played without seniors Makena Moore and Grace Kinser, who were sidelined because of contact tracing from possible COVID-19 exposure.

Now the opponents will be scouting and preparing as the regular season begins. BNL, with its schedule already in flux because of virus issues and cancellations, will host Lanesville on Nov. 7 in the new opener.