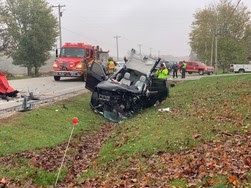 When officers arrived they determined it was a fatal crash and an ISP reconstruction team was dispatched to the scene.

At the same time, a black 2018 Jeep SUV, driven by Mark Cochran, of Bedford, was eastbound approaching the same location.

For an unknown reason, Mosier’s Saturn crossed the center line and collided head-on with Cochran’s Jeep.

After impact, Mosier’s Saturn came to a stop in the middle of State Road 60, and Cochran’s Jeep spun and came to a stop on the north side of the roadway.

Mosier was pronounced dead at the scene by the Washington County Coroner.

Neither alcohol nor drugs are believed to be a factor in the crash; however, toxicology reports are pending.

State Road 60 was closed from the time of the crash until approximately 7:15 p.m., and traffic was diverted onto area roads.