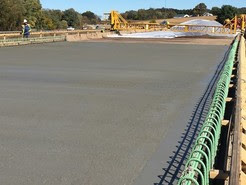 (MARTINSVILLE) – Drivers will begin seeing many of the 2020 improvements and projects wrapping up in the coming weeks as crews stay on track to reach the I-69 Finish Line.

That includes the completion of work to widen State Road 39. Crews are improving State Road 39 in advance of next year’s temporary closure of S.R. 37 in Martinsville.

Much of S.R. 39 in Martinsville has been widened to four lanes between S.R. 37 and S.R. 67 to safely carry more traffic during the closure. Permanent striping is expected this week, weather permitting.

Work is expected to be completed late this week on a new section of Morgan Street north of Martinsville. The new access road connects Country Club Road and Myra Lane along the northwest side of S.R. 37. Further south, the realignment and reconstruction work along Commercial Drive is expected to wrap up early next month. When complete, access will be restored between Industrial Drive and Gardner Avenue.

By spring of 2021, motorists can expect activity along the entire I-69 corridor from Martinsville to I-465. Watch this short video to learn more about what to expect next year. In addition to the 2021 closure of S.R. 37 in Martinsville, S.R. 37 will be reduced to two lanes – one in each direction – between S.R. 144 and Morgan Street in Martinsville. The closure and lane reductions will allow crews to complete work on I-69 faster and safer, saving a full year of construction.

When I-69 Finish Line is completed at the end of 2024, I-465 will be expanded to four lanes in each direction. The first two years of work in the area will focus on overpass construction and widening and rebuilding local streets that cross I-465. That work will start in the spring.

It’s a team effort to reach the finish line! I-69 Finish Line is the sixth and final section of the new I-69 interstate connection from Evansville to Indianapolis.

The concrete bridge deck was poured last week for the new S.R. 37 southbound bridge over Indian Creek. Crews have started installing reinforcing steel for both approaches to the bridge.Crews were installing the new poles for the temporary traffic signal at S.R. 37 and Henderson Ford Road over the weekend. The signal is expected to be in use by mid-November.

Paving is expected this week for another new section of Twin Branch Road. The work in the area is expected to wrap up with surface paving and permanent striping in the next couple of weeks.

Shoulder work and paving is underway on northbound S.R. 37 from Morgan Street to S.R. 144. Northbound lanes are expected to be open for the morning commute between 6 a.m. and 9 a.m. Watch for a northbound lane to be closed daily 9 a.m. to 4 p.m. A northbound lane will also be closed nightly (6 p.m. to 6 a.m., Sunday – Friday) for milling and paving. Drivers should expect narrowed travel lanes during the work.

Drivers should expect a couple of brief overnight closures on or after Wednesday, Oct. 28 for S.R. 37 at the Ohio Street/Mahalasville Road intersection. Utility improvements are continuing and crews will be pulling wires across the intersection. The closures are expected to last about twenty minutes each.

In early November, Mahalasville Road is expected to close between S.R. 37 and Southview Drive for sewer installation. The closure is expected to last about a week.