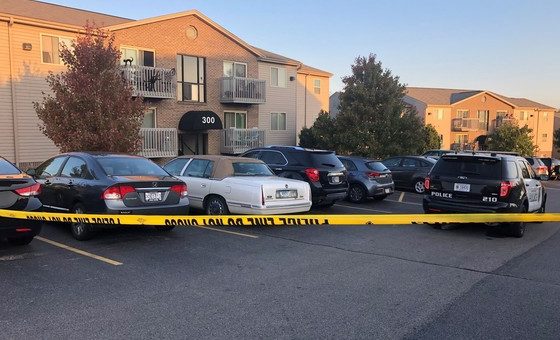 (LAWRENCEBURG) – Early Saturday, detectives with the Indiana State Police-Versailles Post were called to investigate an officer involved shooting and a separate homicide that occurred in Lawrenceburg, Indiana.

Two Lawrenceburg residents died as a result of the incidents.

At approximately 3 a.m., on Saturday, officers with the Lawrenceburg, Indiana Police Department were called to the Summit Pointe Apartments located on Deer Run Drive in Lawrenceburg reference a disturbance.

The first officer arrived shortly after the call was dispatched.

Upon entering the apartment building and standing in the hallway, the officer was confronted by 33-year-old Brandon G. Evans, who was naked and holding a knife.  The Lawrenceburg officer fired at least one round from his department handgun, striking Evans.

The LPD officer along with other officers from the Lawrenceburg Police Department, Dearborn County Sheriff’s Office, and Greendale Police Department attempted to administer first aid to Evans.  Evans succumbed to the injuries he received.  He was pronounced deceased at the scene by the Dearborn County Coroner’s Office.  The officer was not injured.

The investigation determined that Coyne was the victim of a homicide.  She was pronounced deceased at the scene by the coroner’s office.

Investigators believe the two incidents were connected and that Evans and Coyne knew each other.  Detectives also discovered that Evans had allegedly entered a different apartment in the building and caused damage inside the unoccupied apartment prior to officers arriving on scene.

The Lawrenceburg Police Department requested that detectives from the Indiana State Police-Versailles Post respond and conduct an investigation into the incident.

The investigation is ongoing at this time.  Autopsies are scheduled to be performed today in Hamilton County, Ohio.  The involved LPD Officer’s name will be released in a later news release.

At the conclusion of the investigation, the case will be forwarded to the Dearborn County Prosecutor’s Office for review.