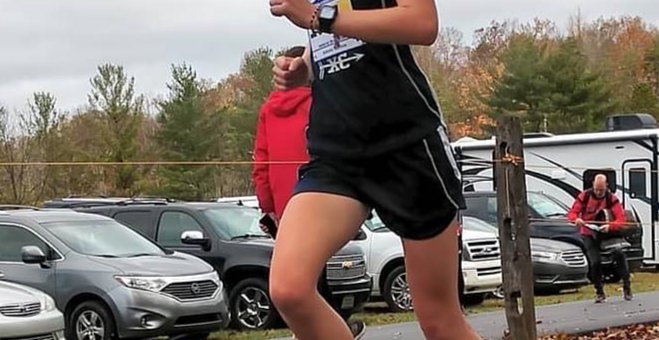 NASHVILLE – Bedford North Lawrence’s Autumn Spence was on the fence, sensing her precarious position as she churned toward the finish line of the IHSAA semistate race on Saturday.

In danger of missing the cutoff for an invitation to the state finals, Spence didn’t tense, she found a faster gear for the stretch run of the 5K race. She cut it close. Razor-thin close.

By a whisker’s width, Spence earned the final individual qualifying spot for the state championship. She was 10th among the racers who were not members of the six advancing teams and advanced to the state meet on Oct. 31 at Terre Haute.

Spence burned the final 1,000 meters, passing a pack and crossing the line in 30th overall, setting a personal record of 19:39.2 while becoming the first BNL runner to reach the final stage of the state tournament series since 2010.

BNL junior Grace Tanksley also competed in the semistate (for the second straight year) and clocked a personal-best time of 20:29.0 while finishing 65th in her final event of the season.

For Spence, the wait was intense. She sat with Tanksley, in their post-race stretching routine, and listened as the countdown began for the 10 state spots. They kept track on their fingers, and got nervous as they started to run out of digits.

Spence was swallowed up by a happy dogpile of friends, family and teammates. Social distancing was forgotten for a few moments as the senior celebrated. “The CDC would not be happy with us,” Spence said with a laugh.

Spence made it with a tremendous finishing kick. At the 4K mark, she was idling in 40th position. BNL coach Jill Vance, who suffered a torn calf muscle while watching the events unfold and left the course on crutches, was fearful of a tearful outcome.

“That, I knew, wasn’t going to get her there,” Vance said. ”But she really put on a tremendous surge, ate up the places, during that final 1K. I didn’t think she had it, but she made it. If she had gone a second slower, she wouldn’t have made it. I’m thrilled for her.”

All athletes have an idea of their position during competition. Spence was no exception.

“I was behind a giant pack of about six runners,” she said. “On that course, it’s hard to get back in the front. There’s a giant downhill leading to the final stretch, and I was able to fly down that and pass four girls in four seconds.

“I had an idea that I would have to push it a little more. It was definitely worth it.”

Spence had started fast, clocking six minutes in the first mile. She still had enough for the blur to the finish.

“That wasn’t the plan,” Spence said. “But that course, you have to start fast or you’re basically done. I got swept up in the race. Then the last two miles you have to make sure you don’t fall back. If you don’t move ahead, you’re done for.”

Tanksley learned that lesson. She got swallowed up in the calvary charge during the first blitz down the wide straightaway.

“The start was a bit of a struggle because I got boxed in and started pretty slow,” Tanksley said. “You have to get out fast. Like really fast. When the field is so much faster than normal, you have to rethink how you’re going to do it. Other than that, it went really well. I was able to pass people in the second mile.”

“To go out with a PR is really nice,” Vance said. “Grace had one of her stronger races.”

Spence will compete in the state finals on the LaVern Gibson championship course at 11:30 a.m.