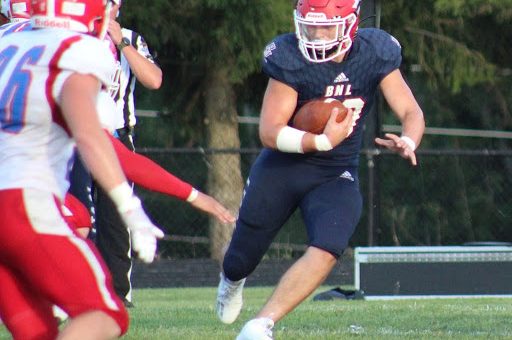 BEDFORD – Bedford North Lawrence senior Gavin Scherschel can only smile when the pain comes, and that won’t make everything all right. And the pain will come when the Stars watch everyone else compete in the IHSAA state tournament.

The nightmare, worst-case scenario that unfolded, costing BNL the remainder of the 2020 football season when members of the coaching staff tested positive for the COVID-19 virus, ended the careers of the senior class. They felt the brunt of the unavoidable decision to withdraw the team from the Class 5A sectional semifinal.

While they were more fortunate than the spring-sport seniors who lost their entire final seasons, the sting still hurt.

“It’s hard,” Scherschel said. “The coaches all year told us not to take any play for granted. Until something like this happens, it doesn’t sink in. Then when your sectional gets taken away, it really hits and you realize what they were saying and how true it was.”

The Stars didn’t see the end coming. They had survived the summer shutdown, they had worked through a mild scare when four starters were forced to quarantine following exposure to the virus, they had played all nine regular-season games. Only 152 teams (among the 318 that play football in Indiana) could make that claim.

The finish line was in sight. BNL was scheduled to host New Albany in the sectional semifinal on Oct. 30. If the season ended with a loss, which all do except for the class state champion, that would have been acceptable. But when school officials were notified of the multiple positive tests among the staff, and the inevitable decision was made, the end came too soon.

“It’s kind of shocking,” senior lineman Austin Messmore said. “I was excited to play a sectional game next week. I was kind of devastated.”

BNL went through so much during its 2-7 campaign. When practice sessions were first allowed, the focus was limited to the next day. The worst was anticipated. But as the days and weeks passed, that sense of imminent dread started to dissipate. The Stars didn’t relax their vigilance in regards to safety protocols – masks, social distancing and hand sanitizer – but the worry was shifted to a back burner.

“About mid-season, I thought we could get to the end,” Messmore said. “At the beginning of the year, it was up and down, we didn’t know if we would make it. Then we kind of figured we’d get a full season.

“We didn’t think we would get past the second game (when the four starters were sidelined), so it was nice to get the full regular season in. But I wish we could have gotten the chance to play in the sectional.”

BNL is one of five teams across the state to withdraw from the state tournament. In the big-picture sense, that’s a small percentage. But that doesn’t soften the blow.

“At the beginning of the season, it seemed more of a big deal,” Scherschel said. “Halfway through the season, it started to calm down. It seemed a lot more relaxed. Then it hit like a wall at the end.“

BNL’s senior class will have to use this experience as a learning tool for life. The adversity level was high.

“I’ll remember how we really never gave up,” Scherschel said. “We didn’t have the season we really wanted, but in the end, even in games we struggled, we really carried our way through until the end. We never hung our heads and kept fighting through all of it. I’ll remember the determination and the will through out the team. We weren’t going to give up.

“I learned a lot of ethics, a lot of hard work. I learned, without hard work, you won’t achieve the things you want. If you want to be good at something, to build yourself and get better at something, you have to put the work in and be dedicated to your craft.”

BNL will now sit idle as New Albany advances unopposed to the sectional final, awaiting the winner of the Floyd Central-Jeffersonville semifinal. The quest for another sectional title (BNL won its lone crown in 2011) will be passed to the next generation. Few will know the pain and suffering of this 2020 class.

“I can look back and think that we gave it our all,” Messmore concluded. “We worked hard and got through it the best we could.”