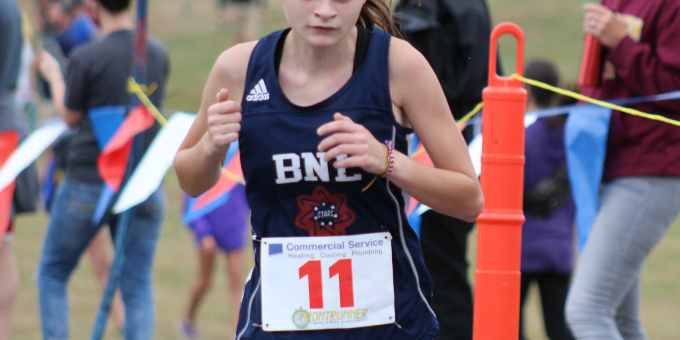 BEDFORD – They’ll take it on the run, and that’s the way they want it. Bedford North Lawrence’s Autumn Spence and Grace Tanksley are under the gun, and they’ll take a run at the final stage of the state tournament series.

BNL’s talented speed duo will compete in the IHSAA semistate at Brown County on Saturday, chasing a coveted invitation to the state championship race. The top 10 individuals who are not members of the top six teams in the semistate field will advance to the state meet at the LaVern Gibson championship course in Terre Haute on Oct. 31.

Tanksley will be making her second straight appearance in the semistate, while Spence is preparing for her debut at this elite level. Both have common goals – fast times and a difficult-to-earn berth in the state’s biggest race.

“I’m so beyond excited to get to run with Grace,” Spence said. “We worked really hard, and now it’s a big, fancy title we get to wear. We made it to semistate.”

Can the Stars add ‘state finalist’ to their titles? They must wade through a huge field (20 teams from four regionals feed into the meet, plus 10 individuals from each regional) and survive a calvary charge on a fast, flat 5K course.

If previous times and projections are accurate, Spence is definitely among the challengers. She was 10th in last week’s regional at BNL, just missing a school record while crossing the line in 19:46.04. She is currently seeded 31st in the semistate, and if history and trends hold true, she will be among the contenders for one of the final state spots.

”Autumn has a really good shot at it,” BNL coach Jill Vance said. “She’ll be running on a faster course with faster competition. If she can get down to around 19:15, which is feasible, she has a very good chance. It will have to be a really hard effort. She’ll need a perfect race.”

Spence, a senior making her final run, has already posted a quick time on the Brown County layout.

“This is my best shot at dropping my times,” she said. “It’s fast and flat. I’m excited to get out and run my heart out.”

Tanksley, a junior, finished 117th in last year’s semistate in 22:16.6, although that time and position can be thrown out as that race took place in deep muck and mire following a week of rain. She didn’t learn much from that experience to use now, but she is peaking at the perfect time.

“Because of the mud, that was just having fun. This gives me another chance to get a personal record, and I think I have a good chance to do that,” Tanksley said. “I know where I should be. I have to get out in the front pack. Otherwise I will get boxed in. I don’t want to be there.”

“For Grace, this is another chance to run at semistate, with hopefully much better course conditions than last year,” Vance said. “We’re trying to get her time down significantly.”

The strategy for the race is crucial. The event starts with a wide, long straightaway, then quickly narrows through woods. Passing opportunities are few on large sections of the winding course.

“You have to start fast in the front,” Spence said. “If you fall behind in the beginning, it’s hard to pass people the further along you get. You want to start fast, and you’re basically set in your spot after two miles.”

“She needs to be in a good position,” Vance said. ”Autumn is a very strategic racer. She can bide her time. That course is a very good course for her, with her running style. She has an amazing stride, and she can just fly.

“You know what? She’s beat her projected finish every single race for about five meets. She’s been peaking at the right time. She’s got a really good chance. We’re hoping everything aligns right. Even if it doesn’t happen, I want her to be able to walk off the course knowing she gave it the best shot possible.”

Spence and Tanksley are looking to be the first BNL runners to qualify for the state meet since 2010.

“That would be absolutely ecstatic,” Spence said. “I can’t even wrap my head around that.”