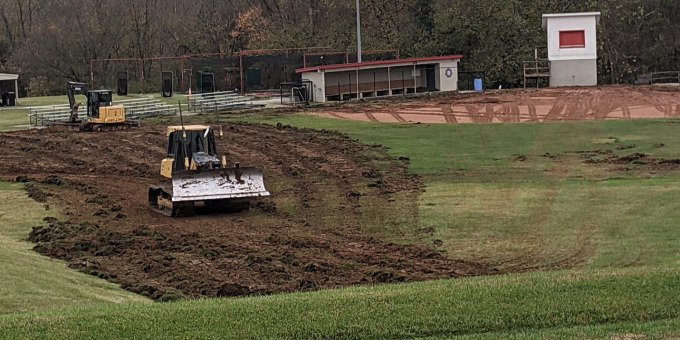 BEDFORD – The construction project, the first major athletics expenditure at Bedford North Lawrence since the addition of the auxiliary gymnasium about three decades ago, officially started on Tuesday. Dirt has been moved. When it concludes, the $2.6 million transformation of three major facilities to turf fields will be a much-needed, long-overdue improvement.

After seeing similar designs at neighboring schools during recent road trips, the current North Lawrence Community Schools board deserves applause for the decision (by a final 7-0 vote) to proceed with the plans. The finished enterprise will be beautiful, cost-efficient and worth every shiny dime.

Actually, this should have been a no-brainer, little-argument upgrade. Increasing facility usage from 70 hours to 1,700 per year, increasing access for multiple sports, classes and extracurricular activities, providing a safer environment for student-athletes, and saving over $1 million in maintenance costs over a decade would seem to be an instant approval, just on a common sense basis.

Of course, nothing works that way, especially after unpopular decisions had been made earlier this year. Not that one equated with the other. Anyone who linked the consolidation of schools in the system with this turf project as some sort of “trade” knows nothing about how school budgets work. This project will be funded through the debt-services fund, used for facilities, and will not raise the tax rate. Was there an appearance problem? Perhaps, with the short time table between the decisions. Should it have gone forward? Absolutely.

It marks an investment in our youth, and not just the football, baseball and softball programs. Physical education classes, soccer, track and band will benefit. As a parent who had kids marching hour upon hour on the pavement while playing instruments and twirling flags, that’s a definite plus.

It marks an investment in the athletic programs. Sports at BNL play a great role in the overall scheme of education and community pride. Success is expected, and many times those expectations are not realistic. Spending this money should not put pressure on the win-loss bottom line.

Sports should be measured by these basics. Do I want my child playing for this coach? Are they looking out for the well-being of my child? Are they teaching my child to represent the school and community with respect, dignity and pride? Are they taught that hard work leads to success? Winning, while important, ranks down the list.

During my 34 years around BNL sports, by an overwhelming majority, good men and women have met that criteria. They have earned my respect and gratitude for doing a job without monetary reward. When changes are made based solely on wins and playing time, when personal agendas are placed above the good of the whole in the decision-making process, they almost always send the programs in the wrong direction. Recent history proves that.

Will this $2.6 million create more success? It will certainly create excitement among the athletes, it will help more athletes reach goals, it will become a source of civic pride. That’s the consensus from other schools that have made similar moves. From those standpoints, it will be worth it, for generations to come.

Other projects need to be addressed in the future. Let’s hope the board members that are in place when those decisions are made will do so with the same courage and commitment that has been displayed.

It’s not about being politically correct, or popular, or postponing a tough choice for someone else, or choosing the easy way. It’s taking the right way, the narrow way. Few want to find that.

That’s a lesson for children of all ages.