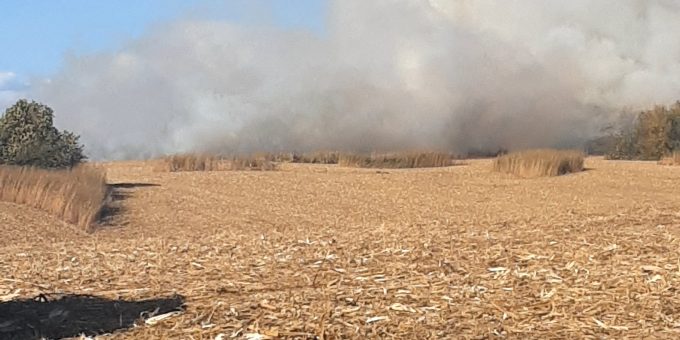 (MITCHELL) – A brush hog caused a large cornfield fire in the 800 block of Grandma Brown Road around 3:42 p.m. Friday.

Gary Hall was also working the field when he noticed the brush hog and a tractor a 78-year old man was driving catch on fire. He ran to the tractor and assisted that gentlemen out of the tractor. Neither man was injured during the incident.

Fire officials believe the brush hog got too hot and, with dry conditions, sparked the large fire.

According to Huron Volunteer Fire Chief Bill Kinser, windy conditions caused the fire to quickly spread into four areas of the cornfield.

One of tractors and brush hogs was destroyed in the fire.

The field is owned by a person in Layefette, Indiana and is being rented by Kyle Hall of Bedford.

Firefighters remained on the scene until about 7:30 p.m. and it took several minutes to bring the fire under control. A nearby farmer was contacted to help get the fire contained.

This makes one of three large fires that occured in the state with one large fire in Knox County and another large cornfield and soybean fire in Carroll County, Indiana.

Burn bans remain in Lawrence County, however, fire departments throughout the county have been dispatched to illegal burns.