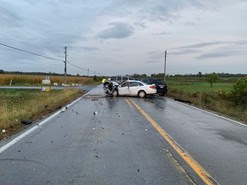 After their preliminary investigation, officers believe a black 2014 Chevrolet Equinox was eastbound on SR56 approaching Slab Road.  The Equinox was slowing as it approached an uninvolved vehicle preparing to turn north from eastbound SR56 onto Slab Road.

A white 2000 Saturn LS1 passenger car was also eastbound on SR56, approaching the black Equinox from behind.  Investigators believe the Saturn failed to slow down or stop for the black Equinox and entered the westbound lane of SR56.  As the Saturn entered the westbound lane, a blue 2006 Toyota Highlander approached the intersection from the west.  The white Saturn and the blue Highlander collided head-on.

After the collision, the Highlander drove off the north side of SR56 and came to rest.   The white Saturn spun slightly and then struck the black Equinox.  The Saturn then came to rest in the roadway.

The driver of the blue Highlander, Beth A. Senatore, 64, of Scottsburg, was pronounced dead at the scene by the Scott County Coroner.

At this time, investigators do not believe alcohol or drugs were a factor in the crash, but toxicology reports are pending.