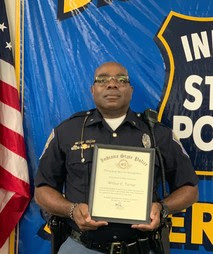 Prior to his appointment as a State Trooper on July 6, 1980, Wilbur Turner attended John Adams High School in his hometown of South Bend, Indiana.  After high school, Turner served two years in the U.S. Marines as a truck driver assigned to the 1st Tank Battalion in Camp Pendleton, California.

Upon graduation from the Indiana State Police Academy, Trooper Turner was stationed at the Sellersburg Post.  Although initially wanting to be stationed closer to home, Master Trooper Turner said the people, weather, and beauty of the area changed his desires.

In his 40 years working for the ISP in southern Indiana, Trooper Turner has had many duties, including working as an undercover officer.  Turner has also served as an Accident Reconstructionist, Tactical Intervention Platoon team member, and Field Training Officer.  He is currently serving as a Defensive Tactics Instructor.  Master Trooper Turner also served for ten years as a Gaming Agent when Troopers were assigned to Indiana casinos.

Trooper Turner resides in Floyd County and is the proud father of three children and two step-children.  Please join us in honoring and thanking Master Trooper Turner for his years of dedicated service.