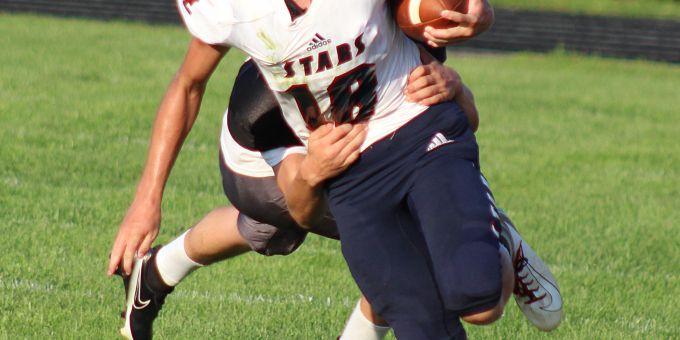 BEDFORD – Nothing, from the swirling virus issues to the burden of playing five consecutive road games while work on the new turf and reconstructed home field was finalized, has been normal about Jeffersonville’s turbulent 2020 season.

The first opponent, a Kentucky program, had to be quickly changed, so the Red Devils ended up playing rival Floyd Central twice (and now a third time when the pairings for the Class 5A sectional were announced). They didn’t play a home game until Oct. 2 and promptly lost that late reopening of Blair Field to Madison for the first time in series history.

They couldn’t find an opponent for Sept. 25. Just left it blank.

Yeah, this two-win campaign – which included the loss of projected starting quarterback Gervasio Mitchell with a knee injury just two days before the opener – has been nothing but grief and grind. Head coach Isaac Parker, a police detective, discovered silver lining amidst all the negative.

“We’re kind of limping into this thing. But we’re still blessed to be playing football,” he said. “We haven‘t had the success we’ve wanted, but we’re still playing the game we love.”

What would turn the limp into firm footing? A victory at Bedford North Lawrence.

Jeffersonville (2-5 after last week’s 41-14 thumping of Jennings County) will seek a second straight win as it ends the regular season against the skidding Stars (2-6 with four straight losses) on Friday night.

BNL is still looking for its first home triumph. The Stars haven’t gone winless at home since 2013, and they need some drive to carry into the bye week before starting the postseason.

“Let’s end the preseason on a high note,” BNL coach Steve Weber said. “Go into that postseason with some momentum. I think we’re ready. We’ll give it a shot and do the best we can. If we can stay away from stupid mistakes and penalties, we have a pretty decent chance.”

The Devils will feature speedy running back Jordan Ferguson, who has compiled impressive stats. He totaled 158 rushing yards against Seymour, 195 against New Albany, 144 against Columbus East, and four touchdowns last week against the Panthers.

“He’s fast, shifty,” Weber said. “If he gets outside, he’s gone. Simple as that. He does a good job of finding daylight and running to it. He wants to use his speed.”

“Here’s a tough kid,” Parker said. “He plays 5 inches and 60 pounds heavier than he is. His legs never stop.”

Jeffersonville’s focus will be on BNL quarterback Brye Lewis, although now the Devils might have to flip a coin on which aspect to worry about. Lewis, whose passing ability was suspect the first half of the season, was 14 of 17 passing (and hit his first 10) for 135 yards last week against Floyd Central. He also ran for his usual 100-plus.

“He finally started pulling the trigger,” Weber said. “A lot of the scrambling, he doesn’t need to take the hits. He’s starting to trust himself. He had a good game.”

Lewis also found a main target as freshman Ryker Hughes had 5 catches for 50 yards. “Ryker is a skilled kid,” Weber said. “He‘s fast and jumps well. And you can‘t use the freshmen thing anymore after 8 games. It was good to get him some touches.”

Hughes is one of four freshmen who have been forced to mature rapidly as starters. There are still problems, most noticeably the 13 penalties against the Highlanders. Most were mistakes of youth.

“We’ve been the most penalized team ever,” Weber said. “A lot of that is youth, and not moving your feet and reaching. They have to figure it out.”

BNL won last year’s clash 23-20, rallying from a 20-0 deficit early in the third quarter. Dalton Nikirk engineered the comeback with a touchdown pass and TD run, and the Devils missed a 26-yard field goal in the closing seconds.

Last meeting: Last year at Jeffersonville, the Stars rallied from a 20-0 deficit for a thrilling 23-20 victory. Dalton Nikirk threw for a touchdown and ran for another, and the Red Devils missed a 26-yard field goal with 22 seconds left.

Game notes: Jeffersonville did not play on Sept 25, unable to fill the schedule hole. The Red Devils played their first five games on the road this season while work on their new turf field was completed.