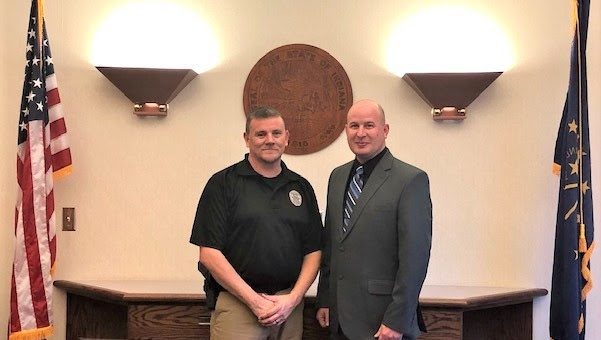 (ROCKVILLE) – Rockville Correctional Facility Warden Julie Stout is pleased to announce the promotion of Christopher MacLaren to Investigator with the Indiana Department of Correction (IDOC) Division of Investigations and Intelligence (ICI).

Mr. MacLaren is a 2006 graduate of the Indiana Law Enforcement Academy who served in law enforcement until 2011.  In July of 2011 he joined the Indiana Department of Correction as a Correctional Officer at RCF.  Mr. MacLaren quickly adapted to the change of focus from patrolling the streets to patrolling a prison campus.  His extensive background helped lead him into assisting with training his fellow staff as a certified instructor in Personal Protection, Security Skills, and Firearms.  All three of these disciplines are essential to the daily function of a prison facility and are tantamount to keeping incarcerated offenders, facility staff, and the surrounding public safe.

Mr. MacLaren promoted to the rank of Correctional Sergeant in November of 2012.  Here he was the first line of IDOC supervision for correctional officer staff helping to ensure ensuring smooth operation of offender housing units through coaching staff and the offender population.

In July of 2108 Mr. MacLaren was promoted to ICI System Analyst where he systematically reviewed data from many sources following up with investigation recommendations when warranted.  In December of 2018 he became a Correctional Police Officer (CPO).  CPOs are a group of law enforcement officers appointed by the IDOC Commissioner to exercise police powers with respect to enforcement of Indiana laws and IDOC policy and procedures.   CPOs, when warranted, will make arrests, and conduct searches and seizures of a person or their property.

In his new role Mr. MacLaren will continue analyzing data, and applying investigative techniques as needed.  He is also now the RCF Security Threat Group Coordinator charged with analyzing and mitigating gang activities within Indiana prisons.

The importance of investigations in a prison cannot be underestimated, nor undervalued.  Through the efforts of Investigation and Intelligence staff contraband can be intercepted, and nefarious plans thwarted, exponentially increasing the safety of staff and offenders as well as the local community.

RCF ICI Lead Investigator Roger Chapman commented, “With Chris’ promotion comes a greater set of challenges.  I am confident he will help the Investigations and Intelligence Division not only meet, exceed, and succeed with whatever challenges come our way.”