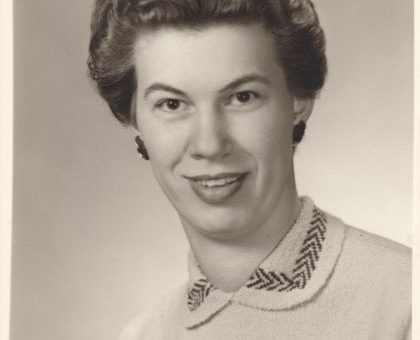 Martha E. Johnson, 84, of Bedford, passed away on October 13, 2020 at Norton Hospital in Louisville.

Martha was a graduate of Shawswick High School with the class of 1954. She had been employed at Jester Department Store, RCA and retired from Visteon. She was a member of the Erie United Methodist Church and the Ladies UMW Society.

Surviving to cherish the memory of Martha are: her husband, Raymond; a sister, Mary Lawson of Radcliff, KY; brother, George Brinegar of Bedford; 2 nieces, Linda Randolph of Bedford and Beth Ann Lawson of Florida.

Martha was preceded in death by her parents, Luther and Josie Brinegar; and sister-in-law, Marcia Brinegar.

Funeral services will be held on Friday, October 16 th at 11am at the Ferguson-Lee Chapel of Thorne- George Family Funeral Homes in Bedford with Pastor Andrew Johnson officiating.

Burial will follow at Fairview Cemetery in Bedford. Visitation will be on Thursday, October 15th from 4-7 pm, at the Ferguson- Lee Chapel.

Memorial contributions may be made to the Lawrence County Cancer Patient Services.

Online condolences to the family may be made at www.fergusonlee.com