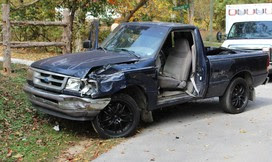 Pekin Town Marshall Jeff Thomas, Washington County Sheriff Brent Miller, and Deputy Abigail Powers responded. After arriving, they learned that the male driver of a blue Ford Ranger had fled the scene on foot after crashing into another vehicle.

Indiana State Police Trooper Eric Powers arrived a short time later and began patrolling the area looking for the driver while Deputy Abigail Powers and Marshall Thomas remained on scene and investigated the vehicle crash. While investigating the crash, Deputy Powers discovered the blue Ford Ranger was stolen out of Kentucky.

Washington County Sheriff Brent Miller and Trooper Eric Powers drove to the address and Sheriff Miller observed a male subject walk behind the residence. Trooper Powers spoke with the homeowner at the front door, and the homeowner said she and her daughter were the only ones at home. Sheriff Miller then advised he had seen a male walk behind the house. The homeowner said she would look inside her house to see if anyone else was there. As Trooper Powers and Sheriff Miller remained outside, they could hear the homeowner talking to someone inside the house. A few moments later, the officers observed a male subject, later identified as 37-year-old Kyle A. Whitlow, of Pekin, jump out of a window on the east side of the house and fall to the ground.

Trooper Powers escorted Whitlow to his police car for questioning. While doing so, he observed Whitlow drop a small clear plastic bag containing suspected marijuana to the ground.

Kyle A. Whitlow was arrested and transported to the Washington County Jail without further incident. Whitlow is charged with the following:

Neither party sustained injuries as a result of the prior crash.