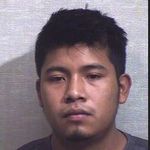 During the execution of the search warrant, investigators located methamphetamine and packaging material at the residence. A small amount of US currency was also recovered.

During an interview, Pascual admitted to investigators that he had dealt in methamphetamine.