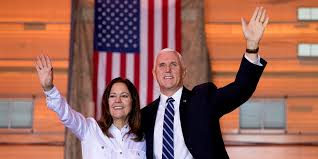 There, the Vice President and the Second Lady will cast their ballots by early voting.

During President Trump and Vice President Pence’s Administration, they have enacted pro-growth policies, which led to an unemployment rate of 3% in Indiana and created over 83,000 Hoosier jobs, including 9,700 manufacturing jobs, since Election Day 2016.

Later that evening, the Vice President and the Second Lady will return to Washington, D.C.

Additional details about the Vice President’s trip will be forthcoming.