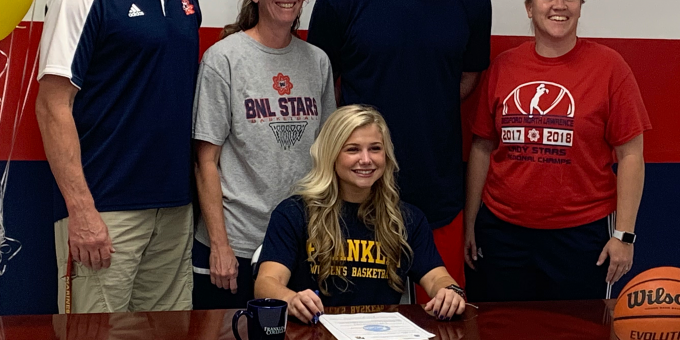 BEDFORD – Several Bedford North Lawrence opponents would say Jenna Louden is already a bear on the basketball court, so adding the nickname “Grizzly” to her title would be overkill and redundant.

Does she growl? It’s hard to imagine the 5-foot-4 blonde whirlwind roaring that loud. She’s got defensive claws, quite deadly in fact. And don’t dare attempt to run away if she confronts the unprepared on the court. Best to play dead.

Louden made it official on Wednesday afternoon, signing her letter of intent to play with Franklin College. She’ll join the Grizzlies once her 2020-21 senior season with the Stars reaches its conclusion.

Louden was a key contributor for the Stars last season as BNL went 21-6 and advanced to the Class 4A semistate. Her reserve role included tasks as a defensive stopper and a ball distributor. Her statistics were modest (2.7 points, 2.0 rebounds, 1.6 assists) but her worth was invaluable. That got her noticed for the next level.

“If you’re schooled in the game of basketball, coaches see that,” BNL coach Jeff Allen said. “It takes all kinds of players to put a team together and you need someone like that.

“It’s her athletic ability, her ability to defend well. She did a great job for us last year. Distributing the basketball is a strong part for her. She looks to get her teammates involved. There are always different jobs for people on the floor, and she does a great job of accepting that role.”

Louden can score, as she proved during her summer tour with Indiana Elite. She averaged 10 points per game, but that’s a bonus.

“They like how I give everything, play hard and defend,” Louden said. “I’ll pass to the open person. I’m not selfish.”

Louden, who plays to major in business marketing, will be one of three BNL seniors headed for the college level. Basketball has given her that opportunity.

”It’s been everything,” she said. “I‘ve met my best friends, I’ve played with a lot of girls.”

BNL will start official practice sessions for the 2020-21 campaign on Oct. 19.