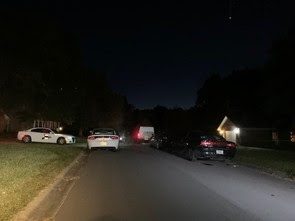 (FLOYD CO.) – A Floyd County man was shot early Monday morning after deputies responded to a 911 domestic disturbance call from his residence.

A preliminary investigation reveals that around 1 a.m. Monday, four Floyd County Sheriff’s Deputies were dispatched to a residence on Country Trace Lane near Floyd Central High School.  A female 911 caller advised of a domestic disturbance and requested police to respond.

When officers arrived, they observed an ongoing domestic situation between the couple, but deputies eventually spoke with both the husband and wife at the door to the residence.

At one point in the conversation, the husband walked away from the door and returned with a shotgun.

After repeated orders to drop the gun, at least one officer fired, striking the subject. Officers rendered first-aid, and the male was taken to University Hospital in Louisville, where he is currently listed in critical condition.

The male was also found to be in possession of a handgun immediately after the shooting.

This investigation is ongoing, and more information will be released as it becomes available.

ISP detectives were assisted by officers from the Floyd County Sheriff’s Department.   Floyd County Animal Control was also called to the scene due to numerous K-9s in the residence.