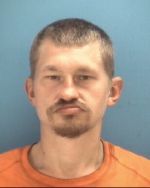 (COLUMBUS) – A Columbus man was arrested for allegedly starting a fire at the ground level hatches of fuel storage tanks in the 11000 block of North US 31.

Bartholomew County Sheriff’s Department deputies arrested 34-year-old Justin A. Jump, of Columbus, on a charge of arson. He is being held on a $40,000 bond.

Chief Deputy Major Chris Lane says if not for the quick response of firefighter this blaze could have been a “very dangerous situation.”