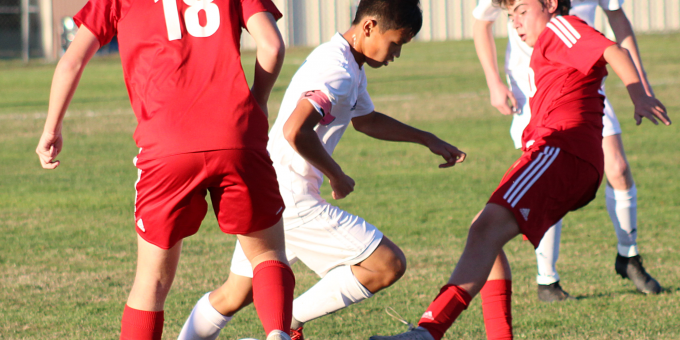 BEDFORD – In the short span of 4:12 midway through the first half, Bedford North Lawrence lost its grip, the game, and the season.

Martinsville erupted for three goals during those 252 seconds, the ultimate difference as the Artesians eliminated the Stars in the opening round of the Class 3A sectional on Monday afternoon.

Antonio Cano Sarobe scored a goal and added a beautiful assist as Martinsville (8-6-1) stopped the Stars 3-0, advancing to the semifinal round against Terre Haute South on Wednesday.

The Artesians did all their damage in rapid-fire succession. BNL aided its own demise with an own goal at 29:03, and Carter Lyon followed with a snappy header off Cano Sarobe’s pinpoint corner kick at 26:58. Cano Sarobe followed with a nifty move through defenders on the left wing for a whistling shot at 24:51.

That was all. That was enough.

“That hurt, that killer period,” BNL coach Logan Jackson said. “We kind of fell apart and couldn’t get the pieces together. We got down, and we couldn’t get it stopped. We have to stop it right away.”

The own goal was weird, but still devastating. Cano Sarobe’s corner kick was deflected in front of the goal, and the ball bounced high in the air above goalie Tanner Robbins. He had to lean back and leap to play it, but the hyper-spin on the shot caused it to slither off his hands and into the net.

The next two were much more pleasing in terms of style. Lyon timed the corner perfectly for his goal, and Cano Sarobe’s powerful run past all obstacles ended with a zipped shot into the lower right corner.

“We started well,” said Martinsville coach Thulani Ncube, a former captain on the Nigerian national team. “I don‘t know what happened later. We didn’t keep on playing our game and moving the ball.“

“We played much better at the end of the first half, and the second half we competed,” Jackson said. “I thought if we could get one, put some pressure on them, we could have made something out of it.

“Our communication was not there. We didn’t do that very well.”

Martinsville will continue to rely on its defense as it looks to wade through the sectional field.

“We’ve been doing well on the defensive side of the ball,” Ncube said. “We just have to wait on the offense.

”Keep on playing hard. That’s the only thing you can do in the playoffs. When you lose, you’re out. Just defend well.”

Bloomington North will face Bloomington South in the first round on Tuesday at 5:30, while Northview will tangle with Terre Haute North in the second game. Those winners will collide in the second semifinal on Wednesday at 7. The final is set for Saturday at 7 p.m.

BNL will have to watch another team celebrate a title on its home turf.

“There’s a couple of games that got away, but we can’t complain,” Jackson said. “They worked hard. Never gave up. I’m proud of them.”