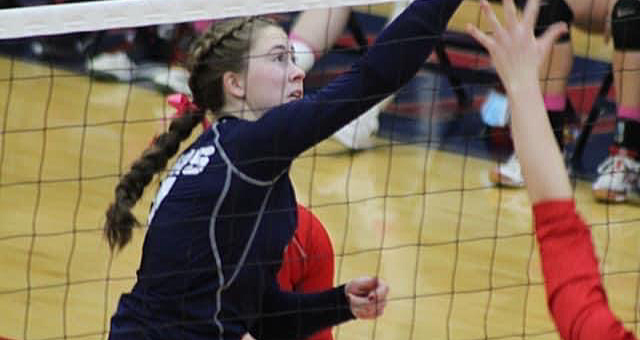 BEDFORD – Gabrielle Arthur’s wrist-bound heart monitor – meant to track exercise – kept going off while she paced the sideline. Arthur wasn’t moving much, except for living and dying with every point.

If Bedford North Lawrence could sense the stress on its head coach, the Stars didn’t display it. Locked in another five-set duel, they battled back from double-match point to record a thrilling triumph on Saturday.

The Stars (14-10 with four straight wins) trailed 14-12 in the final set before fighting back with the final four points.

“I was pretty speechless at the end of that game,” Arthur said. “They fought to the very end. The hardest part of a volleyball game is being down in the fifth set, and fighting back. And they did it.”

The final flurry came from Carlee Kern (a kill off an assist from Annie Waggoner), Haley Deckard (a block at the net), Waggoner (a dump into open territory) and Deckard (a tip winner).

Getting to that point was just as stressful as the conclusion.

The Stars cruised through the opening set but stumbled in the second. Myla Bergman served 11 consecutive points (including 4 aces) during a sizzling run to a 24-7 lead in Set 3, and the Stars carried that momentum into the fourth set for a 20-17 advantage. The Devils refused to die that quietly.

Jeffersonville jumped in front in the final set, taking a 13-11 lead and then the 14-12 edge that put the Devils on the brink. They never got there.

“I’m just so proud of them,” Arthur said. “It’s great momentum heading into a tough conference game on Tuesday.”

BNL (3-3 in the Hoosier Hills Conference) will host Seymour in its final league clash on Tuesday.