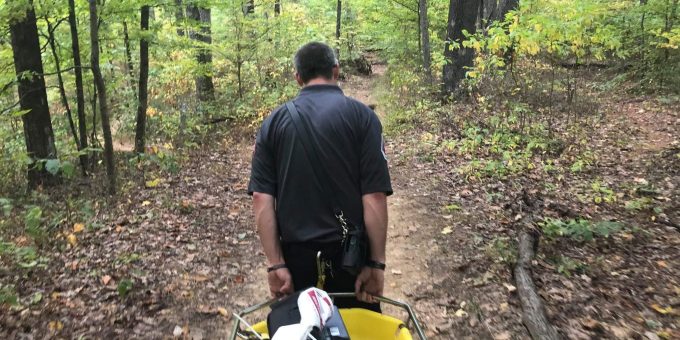 Firefighters responded to the area to locate the injured hiker. Fire personnel were able to make contact with the hiker who helped firefighters determine where she was located on the trail.

The fire department’s UTV was utilized to take firefighters and ambulance crews to the patient.

Due to the size of the terrain the side by side could only travel so far before emergency personnel had to finish the trip on foot carrying the equipment they might need.

The hiker was located and evaluated and it was determined the hiker needed to be carried out in a stokes basket.

Additional firefighters and Indiana Department of Natural Resource officers were requested to the scene to assist with carrying the hiker out of the woods.

By the time the hiker was located and loaded into the stokes basket the sun was setting, making the trip out of the woods more difficult.

Firefighters, emergency medical personnel, and Indiana Department of Natural Resuource officers worked together to carry the hiker while others held flashlights to light the way.

Emergency personnel carried the hiker and her dog approximately a mile and half to the waiting UTV were the hiker could be driven out the rest of the way.