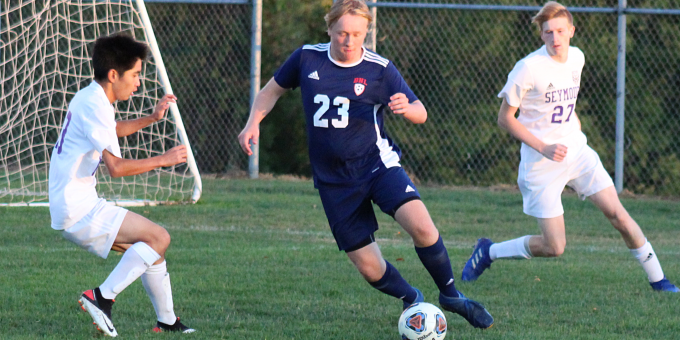 BEDFORD – The debate raged. Point, counter point. And even when the final horn blared, the argument wasn’t settled. The only quarrel with a winner was the final score, in favor of Bedford North Lawrence.

The Stars, under constant attack from Seymour, countered twice in transition for goals, and the Seymour equalizer – a penalty kick with 1:47 left – was erased when the referees overturned the original call of a hand-ball foul in the penalty box.

The last word? BNL escaped with a tense 2-1 victory on Thursday evening, wrapping up the regular season with a momentum shot for the Class 3A sectional next week on home turf.

Josh Anderson scored twice, and Tanner Robbins was – say this with the Marv Albert enunciation and New York accent – spec-TAC-u-lar in goal as BNL improved to 8-8 overall (2-5 in the Hoosier Hills Conference) with a triumph that was celebrated with gusto.

Of course, the final two minutes will be the focal point of discussion, especially with Seymour coach Matt Dennis. He was understandably upset and unhappy when a probable stalemate was reversed to an unpalatable loss.

The Owls (5-8-2, 2-4-1 in the HHC) were in desperation mode and BNL was shriveling into a defensive shell of protection. As is often the case, something bad will happen. And when the Stars were attempting to clear the ball from another mess in front of the goal, the ball bounced up off the hand of a defender.

Whistle, foul. Owls ecstatic, Stars forlorn. Penalty kicks are successful more than 75 percent of the time. Seymour’s Tsubasa Kato lined up for the 12-yard, unguarded shot, waiting for the referee’s whistle. When he heard it, he fired and scored.

But the whistle was not to start the kick. The referee had conferred with the line judge, and they decided the hand ball was inadvertent, wiped it off and awarded the ball to the Stars. The last 107 seconds passed without incident.

“That could have gone either way,” BNL coach Logan Jackson said of the deciding call. “It worked out in our favor.”

Seymour has to feel slighted in another way. The Owls launched 21 shots on goal (compared to BNL’s mere 5) and wore out the grass in front of Robbins. The Stars had to counter with quick-strike runs, and Anderson converted twice.

The first came with 24:28 left in the first half. Karter West gained control and lofted a long pass down the right side. Anderson won the footrace, settled for the shot, and poked one home into the left corner of the net.

The Owls pulled even with 28:26 remaining in the second half. Cameron Cox dribbled across the goal mouth, faked a pass to a nearby teammate and used him as a shield for a sizzler into the left corner.

BNL reclaimed control with 11:35 left as Anderson and Kaleb Sowders worked a perfect give-and-go in transition. That set the stage for the frantic finish.

“Josh had some great goals,” Jackson said. “We were on the ropes and were able to hold them off. It was one we needed. That’s a good one to have going into the sectional.”

BNL, minus starters Lakota Terrell and Uly Mullis (sidelined by injuries), had to count on Robbins in the net, and he was brilliant, making six saves in the first half (including a diving one-handed bat in the last minute) and absorbing a barrage of annoyance and threats in the second half.

“He was all over the place,” Jackson said. “He was on tonight, and we needed him. This is a big confidence builder. We played well and were on the positive side of it.”

BNL now shifts to the postseason. The Stars will clash with Martinsville in the opening game of the sectional on Monday at 6 p.m., and that winner will advance to the semifinal to meet Terre Haute South on Wednesday at 5. The championship is set for Oct. 10 at 7 p.m.