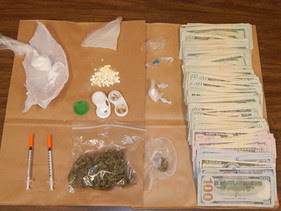 (HARRISON CO.) – What began as a report to 911 as a possible drunk driver ended in the arrest of a Louisville woman on multiple felony drug charges.

Around 1:20 a.m. Thursday, Harrison County dispatchers received and dispatched information on a possible drunk driver headed eastbound on I-64 approaching the Corydon exit.

A caller stated the driver was in a black passenger car with a Kentucky license plate. Trooper Nathaniel Newton responded to the area and soon observed a vehicle matching the description exit on to State Road 135 in Corydon.

While following the car, Trooper Newton observed the vehicle weaving from side to side and making improper lane changes. Trooper Newton then stopped the driver near Federal Drive. The driver was identified as 33-year-old Angela T. Debella, of Louisville, Ky.

As Trooper Newton conducted the traffic stop and investigation, Harrison County Sheriff’s Department Deputy Daniel Evans and his K-9 partner Fynn arrived to assist. K-9 Fynn alerted to the presence of controlled substances in the vehicle, and Trooper Newton subsequently searched the car. Trooper Newton located almost 15 grams of suspected methamphetamine during the search, along with over two grams of suspected heroin with fentanyl, Xanax, and Alprazolam pills, over 31 grams of marijuana, Hypodermic needles, and various items of paraphernalia. Debella also had over $5,600 in U.S. currency in her possession.

The Indiana State Police would like to thank the public for reporting suspected intoxicated drivers and remind everyone that calls such as this often result in unrelated charges that would likely go undetected without the public’s help.