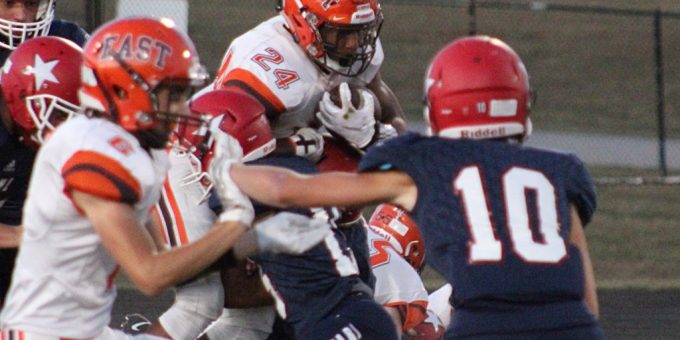 BEDFORD – The bear got poked. Don’t poke the bear, especially when it’s a grizzly that is territorial and temperamental. In the Hoosier Hills Conference, Columbus East is the king, the top of the food chain. Why rile the beast?

This was the year, those doing the poking stated. The East dominance would end, the ridiculous winning streak would die. Floyd Central was even favored by computers and some experts.

Uh huh. When the growling stopped last week, East owned a 35-7 victory over the Highlanders, and the Olympians had extended their league streak to 93 consecutive regular-season games, 104 total against HHC competition, and taken a huge step toward their 17th straight conference title.

Bedford North Lawrence will not make the mistake of jabbing and prodding a vicious carnivore.

The Stars (2-4, 2-1 in the HHC) will visit East (4-2, 3-0) on Friday night, being very Elmer Fudd quiet while attempting to tip-toe into enemy territory without attracting attention and pull off a major upset.

“We’re big-time underdogs, but a lot of times that helps us,” BNL coach Steve Weber said. “The pressure is just not there. Go out, play ball, and whatever happens, happens.”

What should happen? East will establish the running game with power back Mark McDonald, who’s currently 11th in the state in rushing with 942 yards and 17 touchdowns, and a massive offensive line. McDonald is averaging 8.9 yards per carry this season

“He’s real good,” Weber said. “Big, strong, fast. He can beat you outside with speed or run over the top of you. We’ve known that for a long time. And they’re huge up front.

“There’s no doubt they’ll come out and run the ball, establish dominance on the offensive line and wear us out. They go right after people and attack. They’re aggressive.”

“We have to make them pass, and we’ve not had that ability in the eight years I’ve been here,” Weber said. “They’ve been able to run, and pass when they want.

“For a couple of years we were hitting the weight room hard and seeing success. We’ve gotten away from that. Teams like this will show you why that’s important. It will show us where we need to be and the importance of it.”

BNL is coming off a 56-14 loss to Terre Haute South, although the Braves did that damage through the air, exposing a young BNL secondary (two freshmen safeties) to the speed and stress of varsity competition. South quarterback Caleb Stultz threw a school-record 6 touchdown passes.

“We faced a team with a lot of speed at receiver, and we made a lot of mental mistakes,” Weber said. “It was a tough night for those guys. But a good learning night. We’ll have to change gears from covering ground in the passing game to coming up and making tackles. That’s hard for young guys. They’re still boys. They’ll be good players and they’re talented kids, but you can get mismatched when playing against 17-18 year old men.”

BNL will have to answer with the triple-option ground game of quarterback Brye Lewis (625 rushing yards, 7 TDs). Last week he threw for 116 yards (with Ben Cosner catching 2 for 91 yards) but was also picked off twice.