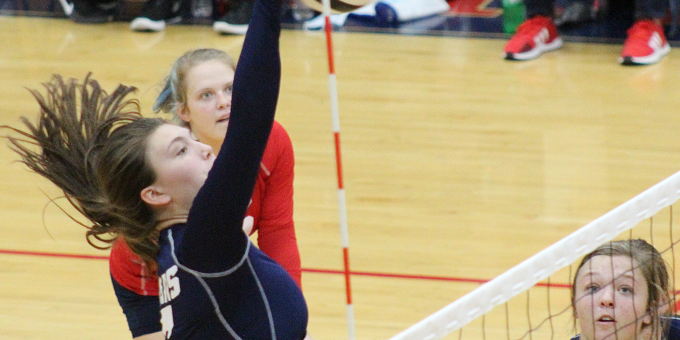 BEDFORD – With apologies to Woody Allen, welcome to another episode of Annie and Her Tipsters.

Lacking the vertical length and net firepower of so many opponents, Bedford North Lawrence has learned to improvise, adapt and overcome. Rather than exchange vicious hits, the Stars have discovered the soft answer that turns away wrath. And nobody is better at volleyball’s version of the rope-a-dope technique than sophomore setter Annie Waggoner.

When the enemy is expecting Waggoner to loft a pass for a hitter, she’s likely to push the ball over the net to unguarded floor space. Volleyball’s terminology labels that a ‘dump.’ A trashy play? Hardly. It’s been a treasure.

Volleyball is often ruled by the high-altitude thumpers, those capable of skying to spike a rocket shot into the defense. BNL doesn’t have many, if any, of those. There are other ways to score.

With Waggoner using her court sense to pick out perfect times for the soft touch, with her hitters taking a cue from that page and dinking shots to open areas rather than slamming something full force, the Stars picked apart the Bull Dogs (7-17 with four straight losses).

“It’s honestly instinct,” Waggoner said. “You have to know when your team isn’t doing well, and you need to get a ball down and get the momentum back.

“When I’m off the net, they don’t expect anything. All the other teams have so many powerful hitters. If I throw it in the middle, it’s something no one else does.”

BNL controlled the tempo, save for the final points of the first set. The Stars owned a 22-20 lead, relaxed a little and paid a price as North rallied and won the final two points on BNL handling errors. That would not happen again.

In Set 2, the Stars started with a 6-0 run. In the third, BNL went up 4-0, then fashioned a 7-0 spurt to a 21-10 advantage as Haley Deckard owned the net with a block, a tip and a block stuff during the blast. And in the final set, Hayley Davis served four consecutive aces to spur the breakaway.

“Every single person on the floor did their job,” BNL coach Gabrielle Arthur said. “When we did that, we’re unstoppable. When we do that, we play so well together as a team.”

“Hayley Davis was just incredible,” Arthur said. “It‘s awesome she stepped up when she needed to. We had more momentum and communication. That’s something we do really well.”

Even on a night when the mishits were good – Bergman’s funky serve floated in short for a point, Kern mistimed a jump and still got the ball over for a point, Deckard turned awkward hits into points during the spurt in the third set – the Waggoner wizardry was key.

“It catches them off guard, gets them out of order,” she said. “They get an off hit, and it gets us a good set. When the other team goes on a run, they’re not expecting us to dump or tip. It throws them all out of whack.

“It’s a lot of fun. And winning always helps.”

BNL will host Jeffersonville on Saturday and use the home game as a fundraiser for the battle against cancer.