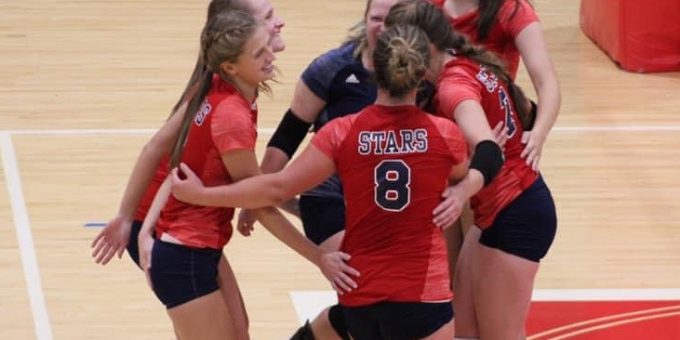 MADISON – Bedford North Lawrence battled back from a two-set deficit to conquer Madison in a thriller during a five-set volleyball battle on Saturday.

BNL traced the turnaround to the defensive side, adjusting to the hitting tendencies of the Cubs. Once the Stars locked in, they locked down a crucial road triumph.

“The first two sets, we just went in and thought it would be an easier match,” BNL coach Gabrielle Arthur said. “I don’t think we were as ready to roll as we thought.

“They did a good job of adjusting. Madison used their outside hitters a lot, and we switched the lineup to figure out the matchups. Our girls did a good job of reading the hitters. Our defense improved every single set.

“We really struggled at net in the first game. We didn’t expect their blocks and defense to be as scrappy as it was. We figured out what worked and ran with it.”

BNL also switched to a 5-1 offense and Annie Waggoner dished out 25 assists to go with 10 digs and 4 kills. Carlee Kern had 9 kills, 8 blocks and 7 digs (plus 3 serving aces)

“Annie basiclly set the last four sets,” Arthur said. “Bryn was really aggressive and Carlee was a powerhouse. She really chipped in when we needed her and Myla was really on her game. Sydney did a great job on the block at the net.

“The girls really wanted to win every game for the rest of the season, and it started today. The best compliment I’ve gotten is we don’t look tired at the end of five sets while other teams do. We’ll take it.”

The Stars will travel to Eastern Greene on Monday.