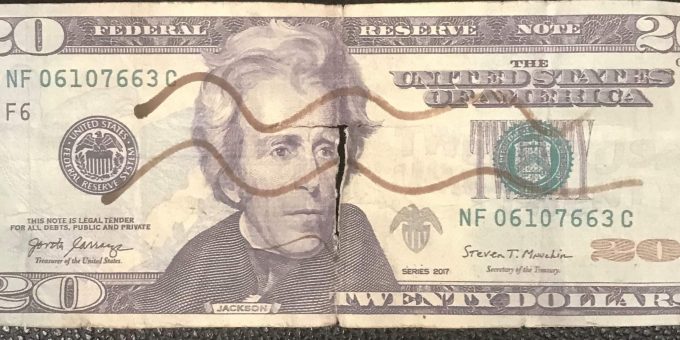 (ORLEANS) – The Orleans Police Department reported they are investigating the finding of a counterfeit $100 bill at a local Orleans bank on September 24th.

According to Sgt. L. Lindsey, all businesses and residents should be on alert.

“The currency is not of good quality, it was smaller in size and noticeable to the touch but in a group of other bills could go unnoticed,” said Sgt. Lindsey. “Anybody who comes to be in possession of any counterfeit currency please contact the Orleans Police Department.”

Though UV counterfeit detection lamps and counterfeit money pens are helpful tools, there are many other ways to tell if a bill is authentic or counterfeit. Physical characteristics of the banknote, such as ink, watermarks, and text, are intentional security measures to help people recognize authentic money.

1. Color-shifting Ink
One of the first things to check to see if a bill is authentic is if the bill denomination on the bottom right-hand corner has color-shifting ink. Going back to 1996, all bills of $5 or more have this security feature. If you hold a new series bill (except for the new $5 bill) and tilt it back and forth, you can see that the numeral in the lower right-hand corner shifts from green to black or from gold to green.

2. Watermark
The watermark is a characteristic security feature of authentic banknotes. Many of the new bills use a watermark that is actually a replica of the face on the bill. On other banknotes, it is just an oval spot. Here are some things to keep in mind when looking at a bill’s watermark:

3. Blurry Borders, Printing, or Text
An automatic red flag for counterfeit bills is noticeably blurry borders, printing, or text on the bill. Authentic bills are made using die-cut printing plates that create impressively fine lines, so they look extremely detailed. Counterfeit printers are usually not capable of the same level of detail. Take a close look, especially at the borders, to see if there are any blurred parts in the bill. Authentic banknotes also have microprinting, or finely printed text located in various places on the bill. If the microprinting is unreadable, even under a magnifying glass, it is probably counterfeit.

4. Raised Printing
All authentic banknotes have raised printing, which is difficult for counterfeiters to reproduce. To detect raised printing, run your fingernail carefully down the note. You should feel some vibration on your nail from the ridges of the raised printing. If you don’t feel this texture, then you should check the bill further.

5. Security Thread with Microprinting
The security thread is a thin imbedded strip running from top to bottom on the face of a banknote. In the $10 and $50 bills the security strip is located to the right of the portrait, and in the $5, $20, and $100 bills it is located just to the left.

Authentic bills have microprinting in the security thread as another layer of security. Below is a list of the microprinted phrases on authentic banknotes:

7. Red and Blue Threads
If you take a close look at an authentic banknote, you can see that there are very small red and blue threads woven into the fabric of the bill. Although counterfeit printers try to replicate this effect by printing a pattern of red and blue threads onto counterfeit bills, if you can see that this printing is merely surface level, then it is likely the bill is counterfeit.

8. Serial Numbers
The last thing to check on a bill is the serial number. The letter that starts a bill’s serial number corresponds to a specific year, so if the letter doesn’t match the year printed on the bill, it is counterfeit. Below is the list of letter-to-year correspondence:

These security measures were designed not just to deter criminals from attempting to counterfeit money but to help people and businesses recognize counterfeit money when they see it. If you see even one error that could mean a bill is counterfeit, you should call police.