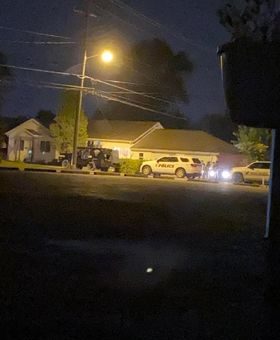 Lantz is facing charge of maintaining a common nuisance and possession of marijuana.

According to a probable cause affidavit on Thursday, September 3rd at approximately 11:59 p.m. a confidential informant was given an undisclosed amount of cash to purchase marijuana from Thornton. The informant recorded the drug deal.

The informant purchased 18 grams of marijuana from Thornton.

On Friday, September 11th at approximately 9:20 p.m. the informant was again given cash and purchased 8 more grams of marijuana from Thornton.

On Thursday, September 17th at approximately 8:05 p.m. the informant was given cash and purchased 15 grams of marijuana from Thornton.

Police say during each of the controlled buys, Lantz was standing near by providing security for Thornton while she sold the marijuana.

On Tuesday, September 22nd at approximately 9:44 p.m., both the Lawrence County and Bedford SWAT teams served a search warrant at 2328 I Street in Bedford.

Police found Thornton inside the home. While conducting a search of the home police located 38 grams of marijuana under Thornton’s bed. They also found a baggie containing five rolled rolled marijuana cigarettes. There was also 3 white boxes of CBD oil with THC in it laying next to the marijuana. On the night stand next to the bed were two silver grinders used to manipulate marijuana with a scale next to the two grinders that had marijuana residue on it.

While the search was happening, Lantz drove up on the scene in a Mitsubishi Galant. When police approached the vehicle they could smell the odor of marijuana coming from the vehicle.

While police were escorting Thornton back to a police car, she stated to the officer that she would find out who snitched on her and “kill” that person.