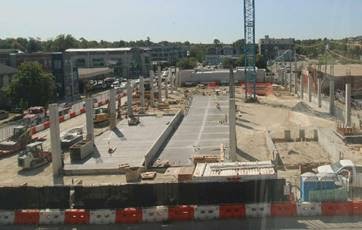 (BLOOMINGTON) – The City of Bloomington continues to advance infrastructure projects that enhance economic vitality, environmental sustainability, safety, transportation, and quality of life.  Updates about a selection of current projects and programs follow:

One of seven public improvement projects Mayor John Hamilton announced in Bloomington’s bicentennial year as a gift to its future, the Downtown Alley Activation project will serve to activate and enhance three blocks of alleys near the downtown square to increase the safety and appeal of the city’s downtown as a destination. This week, crews are mobilizing in the block bounded by West Sixth Street, West Seventh Street, North Walnut Street and North College Avenue to begin replacement of the road surface, correction of drainage issues, and installation of a pedestrian walkway in both the north-south and east-west alleys.

Earlier this summer, City of Bloomington Utilities replaced a century-old water main running beneath the east-west alley in this block and another pipe of similar vintage running along West Sixth Street, and updated the sprinkler system serving adjacent residential structures.  LED lighting has already been installed along the east-west alley, the walls of which will be mounted with a mural.

Scheduled through December 1, this phase of the alley activation project will also encompass the alleys in the block to the east (between Sixth and Seventh, Walnut and Washington), with work scheduled to proceed to the alleys in the block just east of the courthouse square in the spring.  The east-west alleys will be closed to motor vehicles upon completion of the project.

Construction of the City’s new Trades District Garage and replacement Fourth Street Garage is progressing on schedule, meeting high standards for quality and sustainability, and generating an estimated total of 500 local jobs.  Residents may follow the progress of new garage construction via webcams installed at both sites from the links above.

The new Trades District Garage, located between the Showers City Hall building and the B-Line Trail, will add 350 spaces to the inventory of parking spaces downtown upon completion in spring 2021.  The foundation for commercial and other public areas of the structure (adjacent to the B-Line) has been poured, structural support columns installed, and the pad is being prepared for the concrete slab pour.  A recent walk-though by independent structural specialists determined that the quality, finish, and general installation of all concrete components of the structure were of an excellent quality exceeding most other recent, comparable garage projects in the region.

Delivery and installation of a precast brick exterior chosen to integrate with the historic brick facades of the surrounding Showers structures is expected to begin in late October, on-time fabrication and weather conditions permitting.   West Tenth Street may be closed periodically between Rogers and Morton Streets during delivery and installation  to ensure safety for pedestrians, bicyclists, and motorists.

Central structural support columns and slab pouring is underway at the replacement Fourth Street Garage, the construction of which  has been underway since mid-July, with parking deck pours slated for the coming weeks.  To manage traffic into and around the site and increase safety, the City has directed the construction team to install and regularly monitor advance signage, high visibility indicators for the south entry into the garage site, and barrels at the southwest corner of Third and Walnut Streets. While the sidewalk on the east side of the site is closed, sidewalks around its other sides remain open to the extent that pedestrian passage is safe.  As parking decks are formed and poured in coming months, delivery of concrete will entail some traffic interruptions, which the City and the construction manager will seek to minimize.

Scheduled for completion in late summer 2021, the Fourth Street Garage will replace the former 352-space garage with more than 500 new parking spaces of different varieties (accessible, compact, regular, and electric vehicles), as well as new City Parking Management Offices, a bicycle parking depot, and commercial space, and will activate adjacent pedestrian spaces. Both new garages will be the first in Indiana to achieve Parksmart certification, a sustainability credential.

In its commitment to enhancing accessibility and equity and promoting active transportation options the City continues to improve sidewalks throughout the city.  Funded through Phase 1 of the mayor’s Recover Forward initiative, sidewalk enhancements are scheduled to begin October 1 from Fairview to Elm on West Sixth Street and from Waldron to Oak on West Kirkwood Avenue.  Enhancements are focused in lower- and moderate-income areas, with locations identified using overall condition index data from the city’s asset management system and a dataset that identifies residents’ transportation modes in the downtown core.

350 linear feet of sidewalk and 1,025 linear feet of curb have been replaced along North Madison Street between 14th and 17th Streets this season as part of Phase 2 of the Sidewalk Repair Assistance Program.  The partnership gives homeowners in federally designated Community Development Block Grant areas within city limits funding to improve the sidewalk adjacent to their property.  Prospective participants may enter their address into a portal at the project’s website to determine their eligibility. Phase 2 will also see the completion of sidewalk replacement on West Howe Street and East University Avenue.  The Sidewalk Repair Assistance Program removed and replaced more than 2500 linear feet of sidewalk in two neighborhoods during its first phase in 2019.

More information about current City-led infrastructure projects is available here.  When encountering improvement projects, drivers are asked to travel slowly, cautiously, and distraction-free through the construction zone and be attentive to lane changes for their safety and that of the workers.