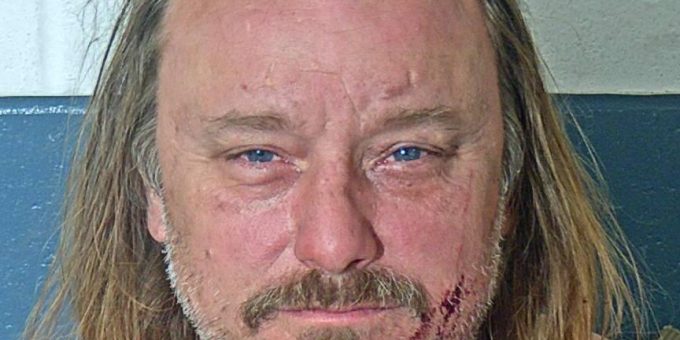 (MITCHELL) – A Mitchell man was arrested on Saturday after a Lawrence County Sheriff’s Department deputy was called to the Mitchell Police Department after a report of threats.

While the officer was responding he received information that the man making the threats had fled to a nearby residence at 426 North Fifth Street.

When police arrived at the home they spoke with the male’s wife who said  47-year-old Stacy Coulter was “highly intoxicated” and had threatened to kill her. She said she fled the home before the incident became physical but that Coulter came looking for her.

Police went looking for Coulter and found him at the home. Coulter swung open the door and wanted to know who was knocking on his door and said his wife was making up the story. Then then told officers they were “harassing him” and “bothering him while he was sleeping.”

Coulter then lost his balance and fell off of the porch.

Despite being told to calm down and stop screaming and cursing Coulter continued to do so.

Coulter told police he had drank four 40 ounce beers earlier in the day. He was then told to go inside and sleep it off and to stay inside the home.

Police then left the home, but a short time later while in the area of 6th and West Oak streets an officer found Coulter a short distance away yelling at a parked car on the corner of Railroad and North Fifth streets.

Coulter was told to get on the ground and that he was under arrest. He refused to cooperate and attempted to pull away from the officer.

Coulter was handcuffed and then transported to the Lawrence County Jail on charges of disorderly conduct and resisting arrest.