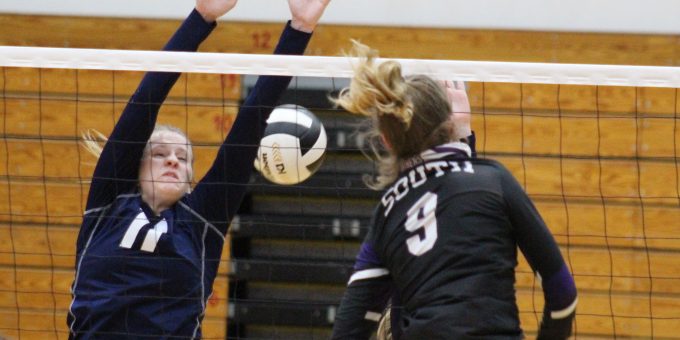 BEDFORD – On the X axis – that’s horizontal for all the non-math geeks – Bedford North Lawrence could graph out quality points against one of the state’s elite teams.

But on the Y axis, the vertical plane, Bloomington South was geometrically superior. No manipulation of the equation could change that fact.

With Kenadee Coyle soaring above, with setter deluxe Bailey DeMier directing traffic with algebraic accuracy, the No.8 Panthers pounded down the Stars in three sets on Tuesday night.

On the ground, BNL (10-10) was solid. In the air, South was exquisite. Coyle, headed to Western Kentucky, often cracked her shots down at a undefendable angle. Shields added 4 blocks at the net. DeMier, called “the best setter in the state” by her coach and on her way to Murray State, set up everything with perfectly-timed, on-target passes to the firing zones. She was a true X factor.

“At a certain point, there’s a physicality we brought tonight that they had trouble keeping up with,” South coach Eugene Kim said. “Our play at the net, the speed we play at. When we control it physically, and stop making silly mistakes, things come together.”

BNL had it together early, jumping to a 12-8 lead in the opening set. That’s when the Panthers took over, pulling even at 13-13 and then spiking to a 20-14 lead. From that point, BNL was never a threat.

“That’s a very strong offensive team,” BNL coach Gabrielle Arthur said. “It‘s not easy. When we got good passes and digs, we did a good job executing.”

Annie Waggoner paced BNL with 8 digs and 6 assists, Haley Deckard had 7 kills and 6 digs, Merritt Callahan added 6 assists, and Carlee Kern had 5 kills and 5 digs in her first game back since suffering an injury in the BNL Invitational.

“We did a lot of things really well,” Arthur said. “We didn‘t miss one serve, we played really good defense. I wouldn’t say it was a disappointment.”

“They’re super competitive, they work hard,” Kim said of the competition. “I think that grit reflects the community. Growing up in Lawrence County, that’s what you get.”

The Stars will visit Madison on Saturday.