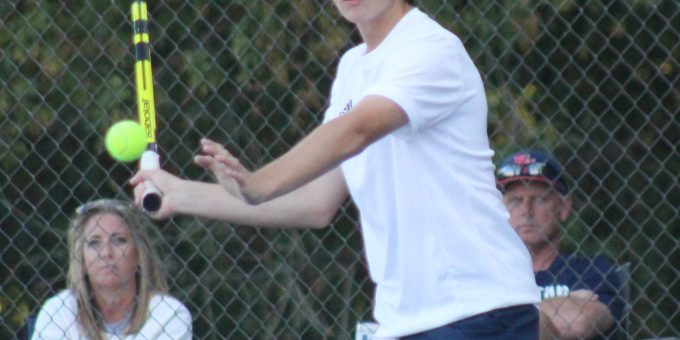 BEDFORD – Down in doubles, Bedford North Lawrence doubled down and hit blackjack with a pair of comeback wins.

The Stars trailed on both doubles courts after the opening sets, then completely flipped the script for two key wins during a 4-1 victory over Jennings County in the first round of the Hoosier Hills Conference tournament on Monday afternoon.

BNL (13-6) already owned a quick 2-0 lead after straight-set broomings in the lower singles. But that necessary third win was in jeopardy, with the Panthers in control on the remaining courts.

After the rocky start, both BNL doubles tandems rallied. Nate Pemberton and Caleb Jones fought back for a 5-7, 6-1, 6-0 triumph over Jansen McDonald and Ryan Schuck at No.2. Cameron Gratzer and Konley Woodward rebounded from a first-set tiebreaker to record a 6-7 (3-7), 6-4, 7-5 decision over Greyson Jackson and Jacob Vogel at No.1.

“It was scary there for a while,” BNL coach Donnie Thomas said. “It was night and day, the first sets in doubles. It wasn’t very good. But after that, they played great. To start with, it just wasn’t there. I don’t know what was going on. The first set was sure aggravating.“

“Caleb was rushing the net, Nate was hitting the ground strokes deep and setting Caleb up,” Thomas said. “They played really well. Cameron was hitting about every volley and Konley was serving well.”

The Panthers prevailed at No.1 singles as Owen Law stopped Adam Tlustek 6-2, 6-3.

BNL advanced to the semifinal to face either Floyd Central or Columbus East on Wednesday.