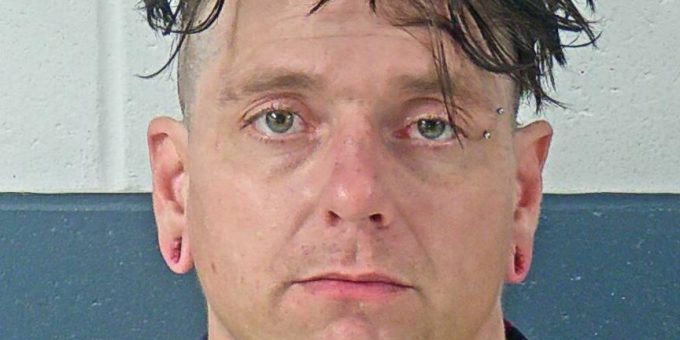 (BEDFORD) – A Bedford man was arrested Sunday after an Indiana State Police trooper stopped his vehicle on State Road 37 south of Ingram Road after witnessing the vehicle traveling at a high rate of speed.

The trooper then attempted to stop the vehicle.

The vehicle pulled over in the grass median. Before making contact with the driver, he hung his head out of the vehicle window and looked back at the Trooper and asked “is there a problem?” The driver was later identified as 39-year-old Christopher Brown.

The trooper told Brown he was stopping him for speeding. Brown told police he didn’t have a driver’s license and handed the trooper an identification card.

Brown told police the car belonged to his girlfriend.

The trooper noted Brown appeared to be very nervous and was shaking and sweating.

The trooper told Brown as long as he had a valid license, he would be issued a warning for speeding.

While looking for the vehicle registration in the glove box, Brown burned himself with his cigarette. The trooper then asked Brown why he was shaking so bad. Brown then dropped all of the paperwork on the passenger seat.

The trooper then requested a K-9 to the scene.

An unloaded pistol was also discovered in the trunk of the vehicle.

Brown told police nothing in the vehicle belonged to him and that it was his girlfriend’s car.

Brown’s girlfriend came to retrieve the car and told police the gun was hers, but she knew nothing about the drugs located in the vehicle.

Brown then said “Thank you for being so respectful to me during the
stop and not treating me bad.” He then stated, “I don’t blame you for arresting me because you stopped me for speeding and I had methamphetamine in my wife’s vehicle.” Brown then stated, “Even though the meth doesn’t belong to me I would do the same thing if I was in your shoes.” The trooper then said to Brown that he thought the vehicle was his girlfriend’s car. He was then informed that the woman was his wife not his girlfriend.

Brown was arrested on charges of possession of methamphetamine and drug paraphernalia.