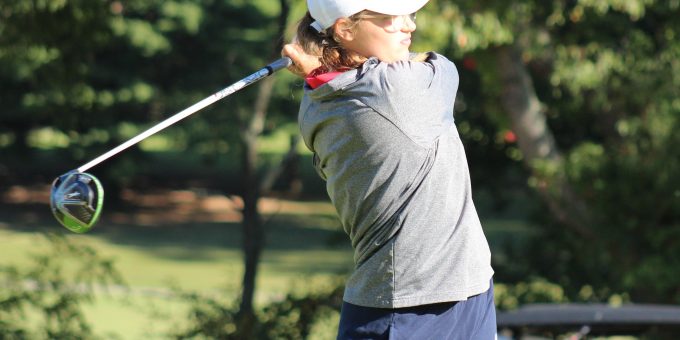 Sanders, the coach’s daughter, the carefree kid more likely to laugh at pressure than kneel to it, fired a 3-over 75 to earn medalist honors and propel the Stars to their eighth consecutive title on their home course.

BNL, which posted the top four scores in the tournament, was unchallenged at the top of the leaderboard with a team total of 338. The top three teams, plus the top three individuals who are not members of qualifying teams, advanced to the regional, with Brownstown (425) and Seymour (434) earning the other two invitations for Stage 2 of the postseason.

Barring a completed catastrophe, BNL was a lock for that. The only real drama was who among the Stars would emerge as the individual champion. Here came Sanders, off recent struggles, with a sensational streak of birdies on the front nine, to the forefront.

After a rough start, Sanders caught fire with a birdie on 4, followed by back-to-back conquests of the par-5s and a closing birdie on the 9th. She posted an even-par 37 on the front 9 (after carding a 43 on the same layout just 48 hours earlier) and closed the back with four straight pars.

What a way for the senior to go out, in her final competitive appearance on her home course.

“I started off really bad. My mental game got turned around. I didn’t count my score after the front nine, I wasn’t going to worry about it. I just knew I had to pick it up if I wanted to win. I just kept calm.“

BNL coach Aaron Sanders watched his daughter overcome a nervous start. After a double-bogey on the par-3 third hole, she shifted into high gear for a fast finish.

“Her short game was good,” he said. “She’s always going to be around the green somewhere, she doesn’t have too many huge misses. She’ll be the first to admit she hasn’t been swinging the club great recently. But she’s an experienced player who knows how to get the ball in the hole at this point. She made a lot of good decisions.”

The rest of the Stars did their usual work. Ashley Chase birdied the 17th to cap an 83, Addyson Bailey birdied the fifth during a rough front nine but still fired 85, and freshman Chloe McFaddin finished with 95.

“We’re in pretty good position here with the sectional,” coach Sanders said. “We know that, being our home course. It’s the No.1 thing on our goal list every year. And we took care of business.”

Springs Valley’s Macy Hall (96), Paoli’s Haley Taylor (105) and Valley’s Kyla Tarr (106, winning playoff for the final spot) earned the three individual tickets to the next round.

BNL advanced to the regional at Country Oaks on Sept. 26. The top three teams from that stage, plus the top five individuals who are not members of advancing teams, will qualify for the state finals at Prairie View on Oct. 2-3.