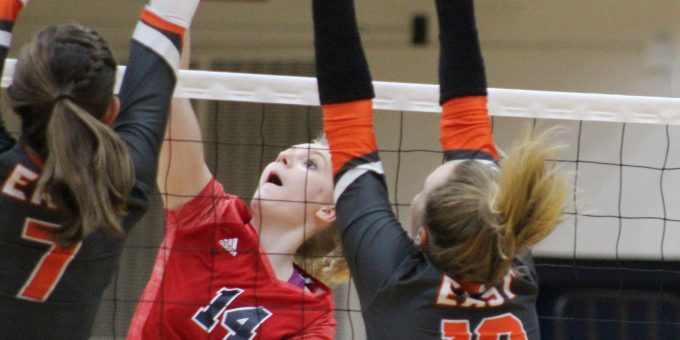 BEDFORD – Columbus East coach Ellyn McIntosh, in her first appearance on the sideline following maternity leave, was welcomed back with a perfect gift.

The Olympians delivered a healthy victory over outgunned Bedford North Lawrence on Tuesday night, sweeping to a 25-7, 25-8, 25-14 triumph. East remained unbeaten in Hoosier Hills Conference play while the Stars (9-9, 1-3 in the conference) suffered their seventh straight setback.

BNL missed injured frontline ace Carlee Kern for the third consecutive match, but even her presence likely would not have made enough of an impact to reverse the inevitable. East (6-4, 3-0) has plenty of what BNL does not: tall, lanky, athletic hitters at the net.

East spikes had a different, distinctive sound, as air was smashed out of the ball. The ball sizzled over the net at a different speed, with the Stars forced to self-preservation mode on defense to avoid a knockdown.

“I don’t want to make excuses, because I don’t think that makes our team better,” BNL coach Gabrielle Arthur said. “But fundamentally, and athleticism wise, those girls are huge. It’s not an excuse, we’re a 4A program and we’ve been seeing teams like that all the time. What can we learn? How can we defend that?

“They just rocked our stuff from the beginning.”

“We hopped out quick with our serve,” McIntosh said. “Cadence went back there and rocked it at the service line, and we kept up our energy and intensity.”

BNL’s best moments came early in the third set. Haley Deckard had a tip kill, sophomore Mallory Pride added a kill, and Sydney Gipson blocked down a point for a 5-4 BNL lead. Gipson added a kill and an ace for an 8-7 advantage.

That surge ended quickly with 5 straight service points by Gilley, and East cruised.

”Serve receive was horrible,” Arthur said. “They were athletic up front, and some of these girls work on that year round. We might not be 6-2, but how do we get more athletic? There were some learning points.”

Annie Waggoner had 6 digs and 6 assists for the Stars, Deckard and Pride totaled 3 kills each, and Myla Bergman had 6 digs.

The Stars will look to end their skid on Thursday at Shoals (varsity only at 6 p.m.). No tickets will be available to the general public for that game.