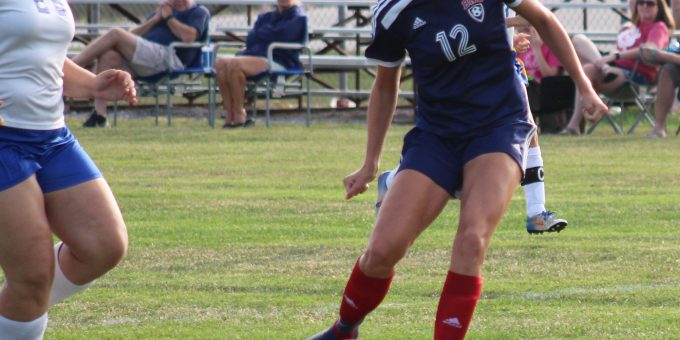 Katherine West scored a first-half goal and Heidi Dufore added two assists as the Stars (3-7) ended a three-match skid with a scoring outburst that’s been missing and requested. Six different players answered the call with goals. The offensive fuse was lit and the explosion was thunderous.

Moore, usually a defensive ace in the back line, made the move to the front of the attack and responded with three first-half goals as BNL bounced back from a couple of frustrating losses with a relentless assault on the Eagles (0-7).

“We wanted that win, after losing back-to-back games we should have won,” Moore said. “Our offense was very good. It showed.”

BNL felt its effort went unrewarded in recent setbacks to Jennings County and Madison. Rather than succumb to frustration, they made Brown County goalie Sarah Callahan pay with constant pressure and shots. Callahan was busier than popcorn in the microwave, and the heat was just as intense.

“Soccer is a funny game,” BNL coach D.J. West said. “It looks like a big goal, but we get in a hurry and a little anxious.

“Tonight we found the back of the net. We could have had four or five more, especially in the first half. I was proud of the girls. They deserved a win after the last couple of games.”

Moore started the scoring with a sizzler from the left wing with 34:05 left in the first half. West connected at 31:59, firing from the right side. Callahan deflected the ball off the right post, but it bounced into the middle and spun backward into the net for a 2-0 lead.

Moore struck again with a left-foot shot from 8 yards (with the first Dufore assist) at 13:31, and she finished her hat trick with a hot low skipper than went through Callahan’s grasp at 2:28.

“We came out strong,” Katherine West said as she joined Moore in attack mode. “We wanted it more.”

“They’re the two best players and we were wasting them playing in the back,” coach West said. “That gives us an offensive-minded midfield.”

Brown County’s goal came with 13:02 left in the opening half as Victoria Klaker scored off a diving deflection by BNL goalie Hannah Riester.

The Stars dominated the second half. Marlit Carter ripped a shot from the right wing into the upper left corner of the net at 37:49, and Claire Nordhoff sizzled home a shot from 12 yards with 36:11 left.

Emily Zhang converted a Dufore pass for a goal at 30:55, and Courtney Crowther finished the scoring at 26:24.

BNL will host Seymour on Thursday and finish the HHC portion of the schedule with Jeffersonville on Saturday.