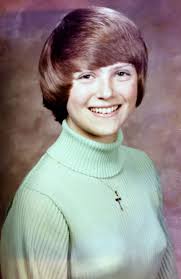 Harmeier, from Cambridge City, was reported missing after she failed to return to IU’s Bloomington campus, where she was a student.

Her rust-colored Pontiac LeMans was found locked and empty on the shoulder of State Road 37, about 2 miles north of Martinsville. The car was later found to have a faulty thermostat.

Ann Louise Harmeier was admired by her Indiana University friends and faculty as a talented actress who worked hard at her acting craft and her studies. When she didn’t show up on campus for rehearsal at a theater production, her friends were instantly worried.

Thirty-six days later, Harmeier’s body was found by Lawrence Stafford, a farmer harvesting corn in a field about four miles from where her vehicle was discovered approximately 7 miles northeast of Martinsville.

Her body was found about 200 yards from a county road in corn standing over seven feet high.

“I was just going along picking corn and ran on the body there laying between two rows,” Stafford told the Associated Press.

An autopsy confirmed she was raped and was strangled with a shoelace.