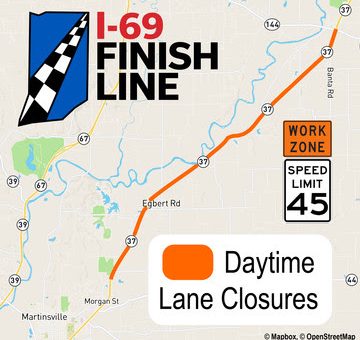 (MORGAN CO.) – Drivers should slow down and watch for temporary daytime lane closures starting next week on State Road 37 from Martinsville to State Road 144. I-69 Finish Line contractors will be paving the road and strengthening the northbound shoulder.

Signage and orange barrels will be set up early next week. Temporary daytime lane closures are expected to begin by Wednesday.

The paving work is expected to continue into the fall. Police are enforcing a reduced speed limit of 45 MPH for the safety of both motorists and highway workers.

Ongoing I-69 construction will require several closures of local roads.