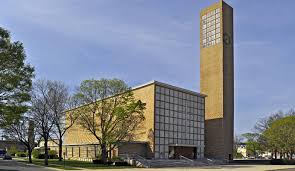 (COLUMBUS) – Columbus’s First Christian Church received a $500,000 grant from the National Park Service’s Save America’s Treasures program, part of the overall $2.4 million project to repair its iconic bell tower that has suffered significant water damage over the years.

The estimated total cost of repairing the 160-foot-tall bell tower of First Christian Church, located at 531 5th Street in Columbus, is $2.4 million. While the federal funds, which come from the NPS-administered Save America’s Treasures grant program, obviously won’t cover the entire bill, the repair-earmarked grant is a very much a solid start.

The First Christian Church was designed by architect Eliel Saarinen, father of Eero Saarinen. Completed in 1942, it was the first contemporary building in Columbus and one of the first churches of contemporary architecture in the United States. The geometric design is one of direct simplicity. A large stone cross accents the limestone façade. To the west stands the 166-foot high campanile, or free-standing bell tower. The materials, exterior and interior, are mostly buff brick and limestone.

The geometric simplicity of the building’s design is exemplified in the rectangular box that houses the sanctuary and the 166-foot-high campanile (bell tower), which became the iconic symbol of the city’s modern architecture.

An initial round of sealing-centric repairs to the boxy brick bell tower in 2018 helped to halt leaks during heavy rains although, during the process, a team of structural engineers found a more significant source of water damage in the form of cracks in the tower’s mortar joints. More substantial planned work would help to execute additional repairs and ensure the structural integrity of the bell tower for years to come.

While the church’s fundraising committee continues to move ahead with securing the cash needed to executive repair and restoration work from altruistic members of the community, Indiana Congressman Greg Pence, brother of Vice President and Columbus native Mike Pence, has been instrumental in helping to secure federal grants for the project.