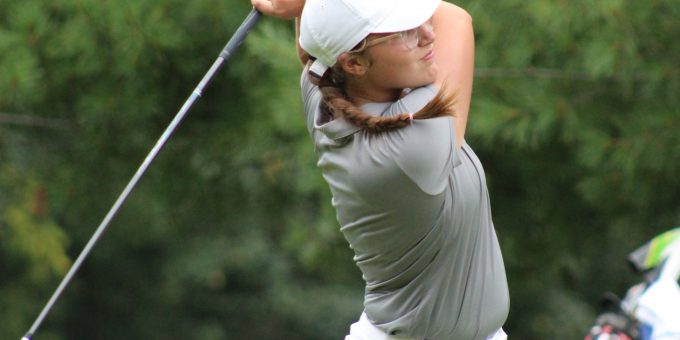 GALENA – Bedford North Lawrence, even at its best, had to finally relinquish its Hoosier Hills Conference crown.

BNL’s Olivia Sanders, the defending medalist, fired a 4-over 75 to finish second individually and earn All-HHC honors, while teammate Addyson Bailey posted a 78 to finish fourth overall. Madison’s Keara Eder was the individual champion with a 73.

“That’s our best score of the year, and everyone was pretty solid,” BNL coach Aaron Sanders said. “We had two scores in the 70s and an 82, and when you do that I feel like you have a chance. We just have to be a tad better. Floyd has been whipping us all season long, and we knew we had to be special to beat them. We gave them a run.”

Sanders rebounded from recent struggles after a tune-up with her professional and a reconnection with her putter. She posted a birdie on the third hole and avoided the big mistake with only 5 bogeys.

“My putting worked for me today,” she said. “I had a lot of one-putts. It feels good to play better and it brings a lot of motivation going into the next few weeks.”

“Olivia was good tee-to-green all day,” coach Sanders said. “She was good around the greens and she posted a good round.”

Bailey had birdies on the 7th, 8th and 13th holes (offsetting a stumble on the par-5 16th), and senior Ashley Chase closed with an 82. BNL freshman Chloe McFaddin capped the team scoring with an 88 in her postseason debut.

Zoe Hoehn carded a 77 while Sophie Cook added a 79 for the Highlanders.

BNL will host Brownstown and Springs Valley at Otis Park on Thursday, the final prep round before the IHSAA sectional on Sept. 19.