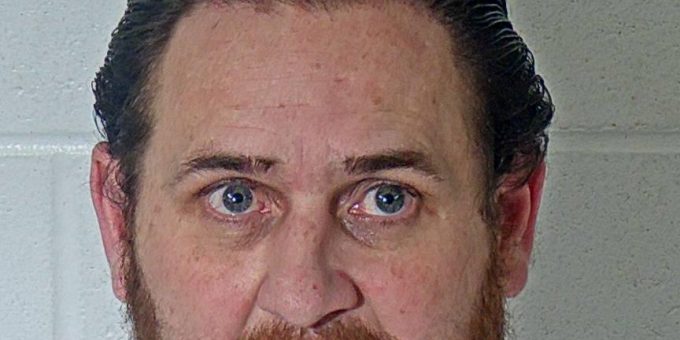 (MITCHELL) – A Mitchell man was arrested on a warrant for dealing meth.

According to a probable cause affidavit, on Wednesday, May 1, an Indiana State Trooper was conducting surveillance on a home at 519 South Meridian Road in Mitchell. Troopers were informed by an Indiana State Police DES Detective that Leatherman and Steven Correll were dealing meth and heroin from the home.

On that same day, while conducting surveillance, the trooper saw one person leave the home and drive away. The driver was traveling southbound on Meridian Road. The trooper noticed the driver then drove left of center so the trooper conducted a traffic stop.

During the traffic stop, the driver admitted they received a text message while driving, and that caused them to drive left of center. The trooper noticed the driver was extremely nervous. The driver told the trooper they were in possession of marijuana and a small amount of meth.

Police then learned Leatherman was wanted on two outstanding warrants.

Police then requested a warrant for the mobile home. During the search police found both Correll and Leatherman at the home.

In Leatherman’s bedroom police found a baggy that contained 3.3 grams of meth and numerous syringes.

Inside Correll’s room, police found a glass plate with a line of meth on it. They also located syringes.

While police were executing the search warrant, a female, later identified as Haley Nicole Holt walked up to the home and wanted to know why police were there.

Holt told police she lived in the trailer and stayed in the same room at Correll.

Holt told police she deals meth for Leatherman. He stated she had sold a quarter gram and a half gram of meth that day.

While looking through her cell phone, the information that she provided about selling meth was corroborated in text messages.

Both Correll and Leatherman both admitted they deal meth.

Leatherman told police that Holt and another female had went to sell a bag of meth, but had brought it back and placed it in his bedroom.

At the police department, Correll told a trooper they had overlooked where they hid the meth. Correll went back to the home with an officer and retrieved the drug from a shed located west of the home.