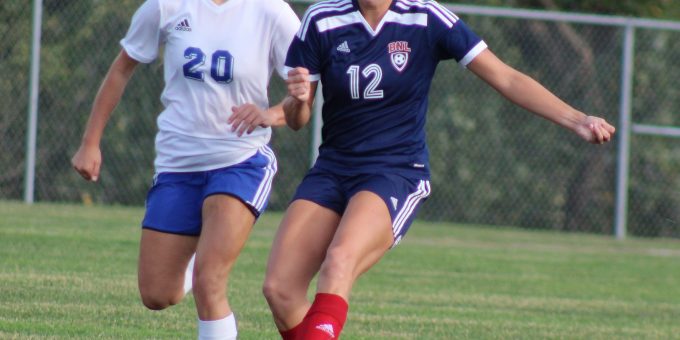 BEDFORD – If soccer had an unearned goals category, much like baseball’s unearned runs, all three of Jennings County’s could be classified that way. Yet they all count the same, whether technically triumphant or totally timely.

The Panthers (5-4, 1-3) scored twice against an unguarded net, and Bedford North Lawrence added to its own misery with an own goal, as Jennings clipped the Stars 3-1 on Thursday afternoon.

BNL’s Katherine West, who announced her commitment to play college soccer at Holy Cross College, cracked home a brilliant shot in the final minute, but all that did was fracture the shutout. The Stars (2-6, 0-4 in the Hoosier Hills Conference) were already broken by then.

If ball control and scoring chances counted toward the outcome, BNL would have been a winner. The Stars generated pressure with 8 corner kicks and 7 high-quality shots, including one that banged off the crossbar. Unfortunately, the game wasn’t horse shoes or hand grenades.

“It’s where we are as a soccer program. We have to play a perfect game against everybody on our schedule. When we makes mistakes, the other teams are able to make us pay. We can’t capitalize on their mistakes.”

BNL didn’t make many miscues, but three were crucial. The first was an own goal, with a lack of communication on clearing the ball from in front of the net, at 32:30 of the first half.

The second came early in the second half, as BNL goalie Hannah Riester got caught in no-man’s land while attempting to play a back pass from her defense. When JC’s Kenna Maschino won the race to the ball and flicked it past Riester, she was alone for the final 25 yards to the goal for a point-blank putaway and 2-0 lead with 34:57 left.

The third was almost anticlimactic. Riester came all the way out to midfield in an attempt to start an attack, But the Panthers foiled that ploy and went the other way in a hurry, with Zoey Ison scoring from the deep left wing with 1:43 left.

The Stars had several early chances to stay within range. Emily Zhang’s shot from the top of the box was denied by the bar with 3:15 left in the first half. Sydney Hallatt took a crossing pass from Makena Moore and fired from close range, but that was gobbled up by JC goalie Cheyenne Leslie midway through the second half. And Moore ripped a shot over the target with two minutes left. Any of those go, and the circumstances change.

“We dominated on this end, we out corner-kicked ‘em, outshot ‘em, I’m sure,” West said. “It’s great to get all those corner kicks, but the problem was they put all 10 in the box, we have our kids in there, and the ball gets bounced around. Then we‘re just trying to.muck the game up, make it ugly and win ugly. We can’t do that right now.”

BNL’s goal was not ugly. West took a pass on the left wing, slipped down to do the cheerleader splits, got up and beat two defenders with a 30-yard blast with 29 seconds left.

“I wanted that goal,” she said.

BNL will return to action on Saturday, hosting Madison at 10 a.m. (varsity only).