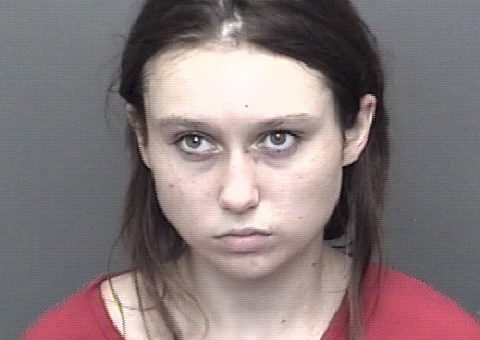 (VANDERBURGH CO.) – On Wednesday, 19-year-old Lauryn Connelly, of Evansville, was arrested after allegedly fleeing from a trooper on August 25. She is currently being held in the Vanderburgh County Jail without bond.

On Tuesday, August 25, Trooper Ross Rafferty was patrolling in the area of Kentucky Avenue and Washington Avenue when he observed the driver of a white 2007 Chevrolet Aveo traveling south on Kentucky Avenue at a high rate of speed.

The vehicle was clocked by radar at 50 mph in a 30 mph zone.

Trooper Rafferty activated his emergency lights and attempted to stop the vehicle when the driver turned east onto Riverside Drive. The driver failed to stop and continued east until the female driver reached stopped traffic near US 41.

Trooper Rafferty pulled alongside the vehicle and ordered the female driver to pull over. The driver pulled forward a short distance and turned south onto Gilbert and stopped.

As soon as Trooper Rafferty exited his patrol car the female driver accelerated and continued south on Gilbert, east on Sweetser, north on Kentucky and west on Riverside Drive.

The driver disregarded all stop signs and the traffic light at Kentucky and Riverside Drive. Due to traffic conditions, the pursuit was terminated.

Trooper Rafferty continued his investigation and was able to identity the female driver as 19-year-old Lauryn Connelly, of Evansville. She had an active felony warrant out of Henderson, KY for a methamphetamine charge.

The Vanderburgh County Prosecutor’s Office reviewed Rafferty’s investigation and issued a warrant for her arrest.

Connelly is now facing a felony charge of resisting arrest, and was arrested on a warrant out of Henderson, Kentucky.