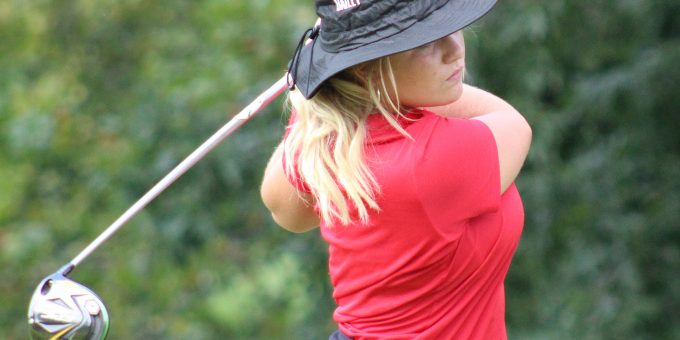 BEDFORD – The emotions of Senior Night, especially when that honor moment has not been guaranteed in recent months as COVID has forced cancellations, can be overwhelming. Performing at a high level is often difficult.

Bedford North Lawrence’s Addyson Bailey tucked her wide-brim hat down a little tighter over her eyes and went to work, handling the inner chaos with outer grace as she powered the Stars to a 9-hole victory over Brownstown.

Bailey carded a 2-over 39 on the front nine of Otis Park on Thursday afternoon, celebrating in style as BNL posted a 175-205 win over the Braves.

Before she gathered with classmates Olivia Sanders, Ashley Chase and Kennedy Blair to commemorate and reminisce about the four years of their lives that have vanished in a twinkling, Bailey was focused on the task. She did that better than everyone else.

“It’s a big challenge,” Bailey said. “Trying to shoot good. I tried to keep my emotions aside while I played and it paid off.”

Bailey birdied the par-5 5th hole to offset three bogeys during her tour.

“She hits the ball in play most of the time, and she’s starting to get her putting figured out,” BNL coach Aaron Sanders said. “She doesn’t give away many shots around the green, and that’s a big plus.”

Chase also birdied the fifth on her way to a 42, Sanders struggled with her game and fired 44, and Blair posted 56. Kenley Craig capped the team scoring with 50.

Those are not exactly the numbers Sanders expected from his squad, although the circumstances dictated some of that and can be excused. However, with postseason tournaments fast approaching, time is now a factor.

”Olivia has to come out of her funk,” Sanders said. “She knows it. She’s got to come out of it quick with Saturday (the Hoosier Hills Conference tournament at Valley View) coming. We’ve got a couple of weeks before we have to be really good, but we have work to do.“

Once the scorecards were signed, the hugs and speeches began. Bailey figured about 95 percent of her life has been spent at Otis Park, a high estimate certainly but accurate when looking through the prism of the last four years.

“It’s very depressing,” Bailey said as the finality closes in. “It’s unbelievable. But we still have tournaments to be together.”

“It’s very overwhelming,” Olivia Sanders, one of those athletes who played for their father and faced added pressure in that dual role, said while fighting back tears. “My dad being here all four years makes a huge difference. It was definitely better.”

“It’s tough,” coach Sanders said. “It seems like it’s gone pretty quick. We weren’t sure we were going to have a season. We’re glad to get it in, glad to get a whole season. They were looking forward to this night. It’s bittersweet to see them all go.”