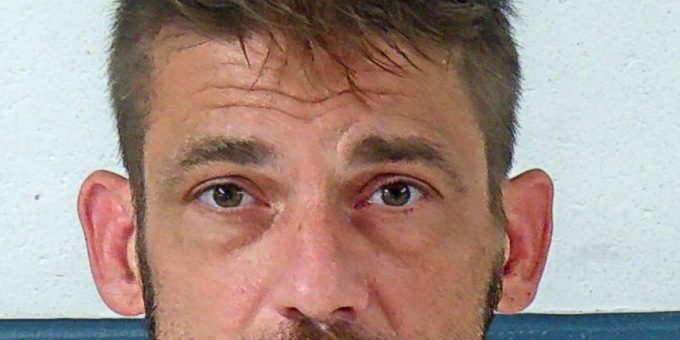 (MITCHELL) – A man was arrested on drug charges Sunday afternoon after a Mitchell Police Department officer stopped his vehicle for a traffic violation.

According to a probable cause affidavit, on Sunday at 3:45 p.m. officers were on patrol in the area of Fifth and Oak Streets when they noticed two vehicles traveling south on Fifth Street. The vehicle in the rear was following the first vehicle extremely close. Both vehicles conducted the same turns and drove in an erratic traffic pattern as if they were concerned by the police’s presence.

Officers followed the vehicle and did not see a registration plate on the first vehicle.

The first vehicle pulled to the side of the road and the second vehicle turned north onto 7th Street.

The first vehicle then continued west on Grissom Avenue and parked near the intersection.

That vehicle did not have a registration plate, so the officer made a traffic stop.

The female driver was Kady Wilson. She abruptly exited the vehicle and began walking toward the police car.

She was ordered back into her vehicle and sat in the driver’s seat with the door open.

Garrett Sears was a passenger in the vehicle.

Kady was extremely nervous and told police she did not have her identification with her.

Police say Kady spoke in an accelerated manner and would not make eye contact. At that point, Sears began yelling at Kady telling her to stop being so nervous.

While speaking with police they noticed a metal grinder that is commonly used to prepare marijuana for smoking.

Kady provided police with a title of the vehicle and accompanied one of the officers back to the police car. Another officer obtained a paper jail release
identification from Garrett.

Police learned Garrett had multiple felony warrants in other states.

The officer then had dispatch confirm the warrants and see if any of the states would extradite.

During this time Kady asked for a cigarette and continued to be unable to stand still. She was pacing back and forth. Police learned Kady’s criminal history and learned she had priors convictions for possession of illegal narcotics.

As officers continued to engage with Kady in conversation they observed she was overly talkative and would cross her arms and rub them
together as a type of ”self hugging”. She was asked if there was anything illegal inside of the vehicle and she replied the vehicle was not hers but belonged to Sears.

The officer asked if Garrett was not there would she grant consent to search the vehicle. Kady stated no.

A police dog was requested to the scene. Kady frantically looked toward
the vehicle and yelled to Sears that a dog was coming.

Kady was then issued a written warning from the Lawrence County Sheriff’s Department.

Sears was then asked if police could search the vehicle and he refused.

The canine conducted a free air and alerted police to possible drugs in the vehicle.

Kady has a valid prescription for Suboxone.

When Kady was shown the syringes and test results she began to cry and said that they did not belong to her.

Officers explained to her they located the syringes in a backpack full of what appeared to be female type items. Kady continued to deny the items belonged to her.

Kady was then detained.

Sears told police the syringes did not belong to him.

Police allowed Sears and Kady to speak alone for a moment, and several seconds later Garrett advised that the syringes belonged to him.

During transport Garrett Sears asked an officer if he did the right thing. He was told if the items belonged to him then he had. Sears then told the officer that Kady was seven months pregnant with his baby and he does not want her to go to jail.