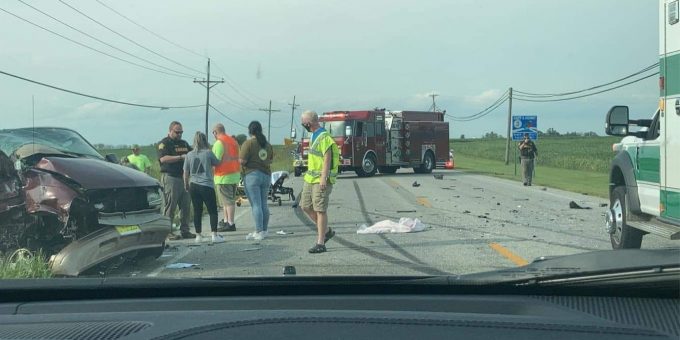 (HOPE) – On Monday, at approximately 5:05 p.m., Bartholomew County Sheriff’s deputies responded to the intersection of State Road 9 and East County Road 450 North after a report of a two-vehicle personal injury accident.

The driver of a 2011 Chevrolet Astro, 69-year-old William Jett, of Seymour, was ejected from his car. He was flown by Lifeline to an Indianapolis hospital.

The driver of a 2005 Chevrolet Silverado, 45-year-old David Nickerson, of Columbus, was taken to Columbus Regional Hospital for treatment.

According to witnesses, Jett’s vehicle was traveling southbound on State Road 9 approaching East County Road 450 North when he braked heavily for an (uninvolved) vehicle turning westbound onto the county road from State Road 9.

Police say Jett appeared to lose control of his vehicle causing it to spin into the northbound lane where it was struck by the vehicle driven by Nickerson.

Bartholomew County Sheriff Matthew A. Myers, who was close to the scene, also responded to the crash.